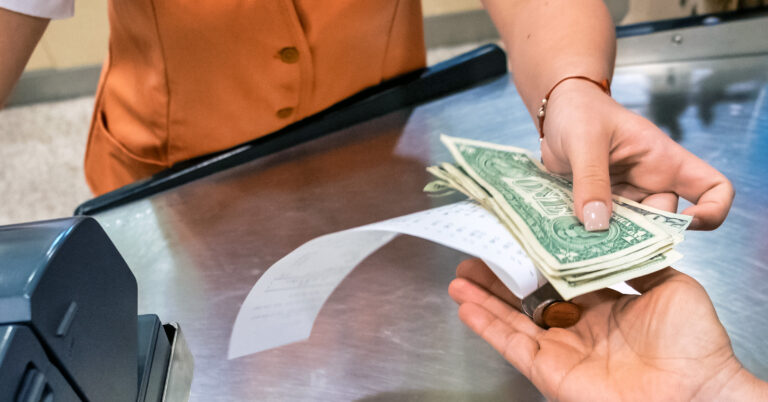 Do you feel your paycheck isn’t going as far as it used to?

That when you go to the grocery store, you’ve noticed your bill is higher, but there are fewer and fewer items in your cart with every trip? (Perhaps you’ve even taken items out while waiting in line at the checkout counter.)

And that when you pull into the gas station, you decide more often that maybe you can stretch it before you need a full tank?

You’re not crazy. Sixty-two percent of Americans think their family’s income is falling behind, and 83 percent of voters say they’re experiencing hardship due to inflation and increased prices.

According to the Bureau of Labor Statistics, real wages are down 2.6 percent in the last year. On top of that, inflation is costing the average American household $430 per month — essentially an additional tax of $5,200 this year.

How is Washington responding? By proposing yet more spending.

The president’s 2023 budget proposal would hike spending by $1.5 trillion and increase taxes by even more — $2.5 trillion — over the next decade. Not to be outdone, Congress is considering another $5 trillion as part of a social spending bill later this year.

This is on top of the trillions approved by both sides last year — $700 billion of which remains unspent. 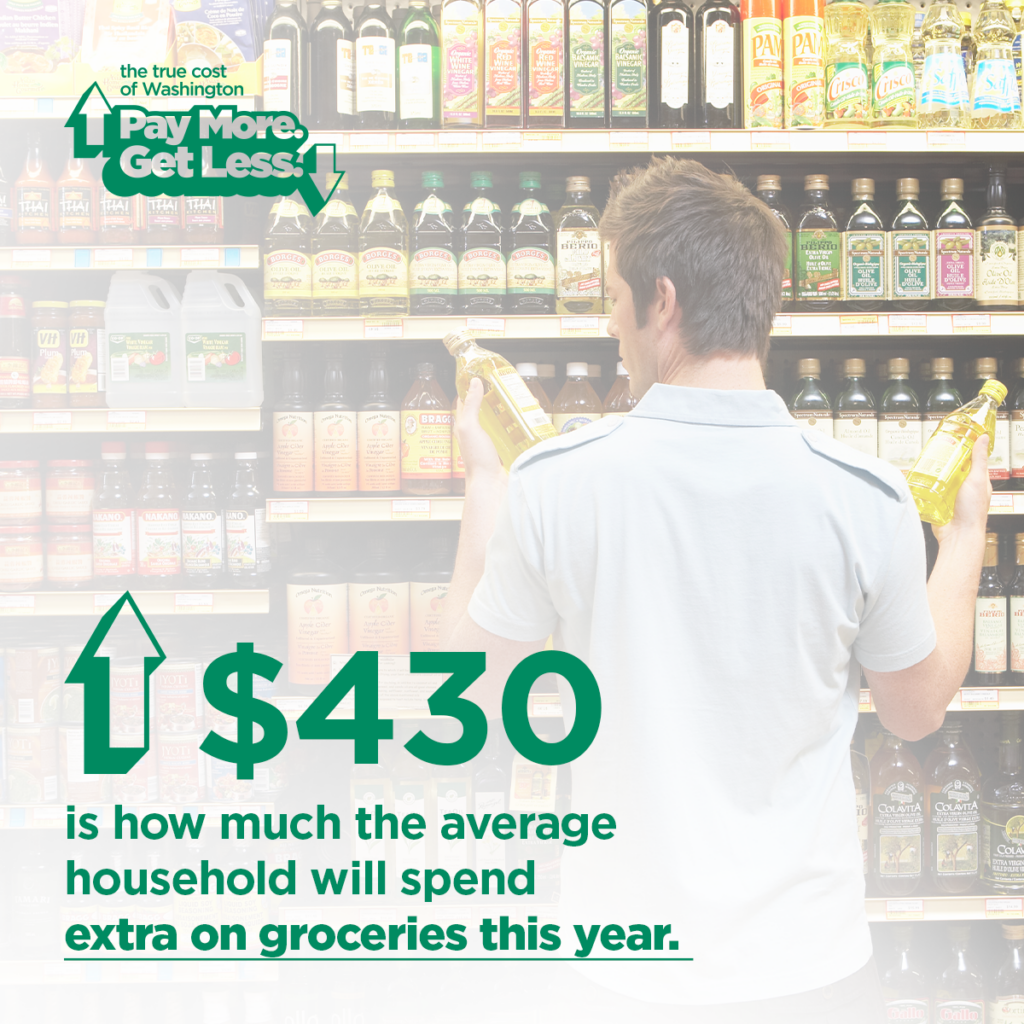 These rising costs of living can be linked to wasteful government spending. The more money the U.S. government prints and pumps into our economy, the worse the situation becomes. Reckless spending and harmful regulations in Washington are hurting the American people and stifling the American Dream.

But there’s a better way.

We can reimagine how to make life more affordable for everyday Americans. It’s possible, if we:

These policies are a subset of AFP’s 2022 federal policy agenda. They were chosen because of the immediate impact they could have on our current economic crisis.

As energy expert Abigale Tardif has pointed out, the government has made several policy decisions hindering our ability to build and supply reliable, affordable energy in the U.S.

You’ve felt the pain of these barriers at the pump — perhaps you’re going longer before filling up your tank or cancelling trips altogether, given that a gallon of gas is up 33 percent from last year.

If so, you’re not alone: the average household is spending $1,433 more on gas compared to a year ago. 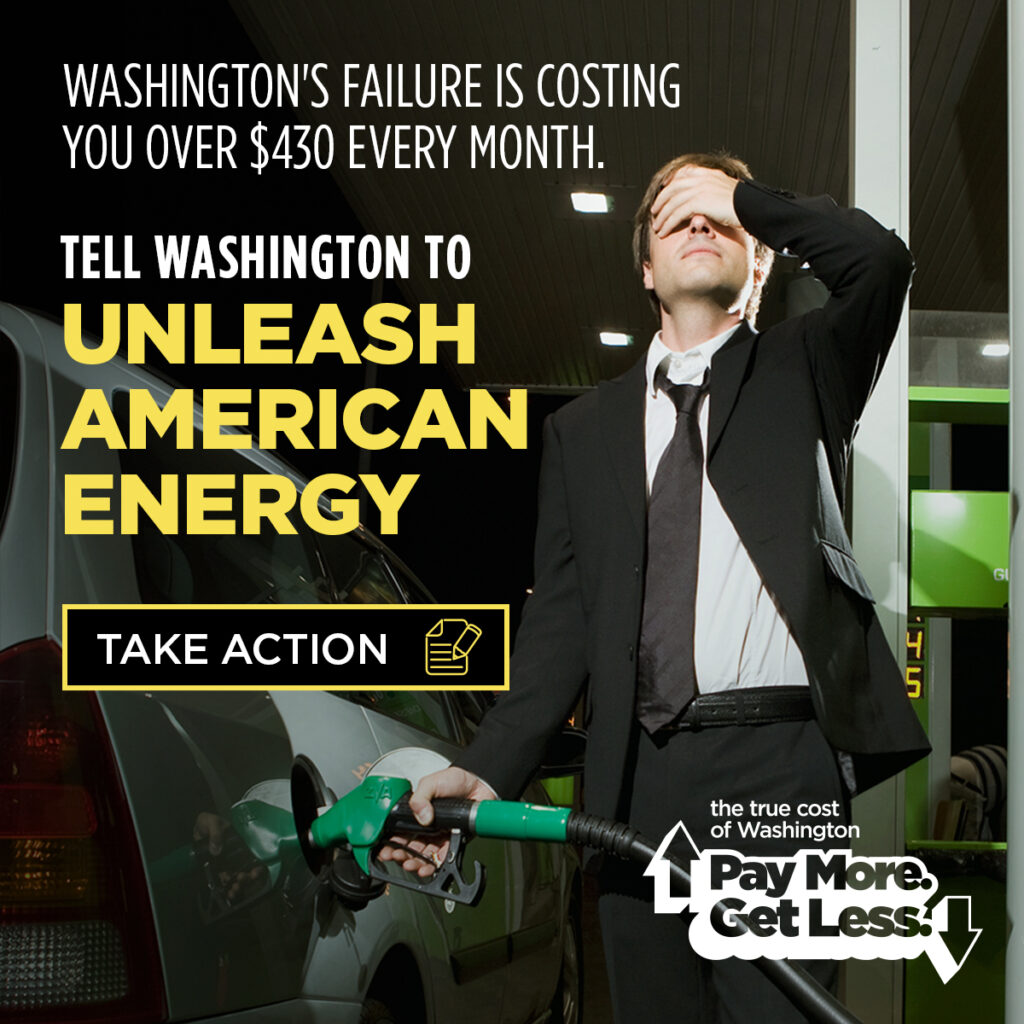 These affordable energy solutions can make energy less expensive for everyone:

These affordable energy solutions and more can be found in Americans for Prosperity’s agenda to promote a bottom-up approach to energy and the environment.

Energy costs aren’t the only area where regulations are wreaking havoc. While you’ve seen prices jump at the gas pump, no doubt you’ve also seen them spike at your local grocery store.

2. Cut the red tape to fix the rising cost of food 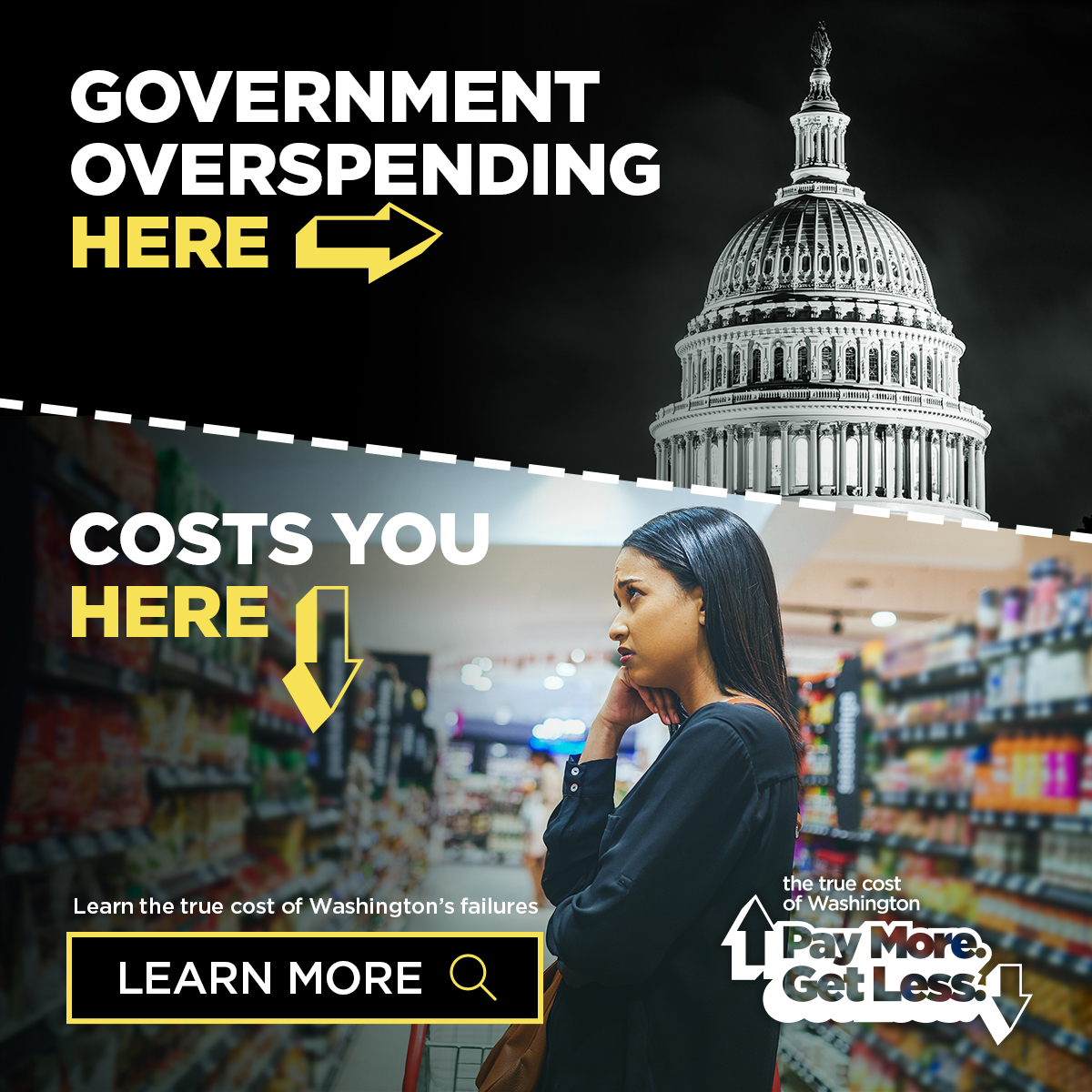 This is due to many factors, including inflation driven by excessive government spending and supply-chain issues (which we’ll cover in just a bit when we get to trade).

But it’s also caused by regulations that restrict access to the everyday goods you rely on to keep your household running.

One of those regulations is the Renewable Fuel Standard. This law requires gas and other transportation fuels to contain a certain amount of biofuel, such as ethanol.

40 percent of all corn produced in the United States is used to make ethanol. Under the RFS, corn prices have increased dramatically, incentivizing farmers to replace other crops with corn and grow corn wherever they can. This in turn raises the prices of other foods, which are now scarcer because they’re being cultivated less.

But the consequences of burdensome regulations haven’t stopped at energy markets or your local market — these restrictions are affecting the housing market, too.

Since 2019, housing costs have risen faster than income, with close to half of renter households spending more than 30 percent of their income on housing.

Government rules and policies related to housing, land use, and zoning are some of the biggest drivers of this problem.

We can fix this by removing those regulations that prevent housing from being more affordable.

There are several bills that would help, but one worth mentioning is Sen. Todd Young’s Yes In My Backyard Act.

This bill would discourage exclusionary land use policies and remove other barriers preventing people from using their land as they see fit.

Learn more about the Yes In My Backyard Act and other policy solutions AFP is advocating to reduce housing prices in America.

When most people want to buy a house, they save. They budget. You’d expect these commonsense behaviors from our lawmakers, right? Right?

It may shock you to learn Congress doesn’t have a budget.

Sure, it goes through the motions of putting one together and appropriating all government spending, but, despite appearances, there is no real, comprehensive budget.

Massive government “stimulus” spending during the pandemic hasn’t helped, either. This trillions in new spending overloaded the economy and kickstarted the inflation we’re experiencing today.

It bears repeating: The more money the U.S. government prints and pumps into our economy, the worse the situation becomes. The amount of money in the U.S. economy increased by 41 percent from February 2020 to February 2022. Economic output, however, only grew by 3 percent.

Congress needs a real, comprehensive budget with all spending and revenue in it — a.k.a, a unified budget.

Another solution is for Congress to adopt smart budget targets that control the debt and promote economic stability:

Get the details about the better budgeting approaches Congress can take to beat inflation.

These solutions are focused on what Congress can do to get its act together. But what can Congress do to unlock the ingenuity and innovation of American workers?

5. Fuel the flexible workforce of tomorrow through legislation such as the Employee Rights Act, the Modern Worker Empowerment Act, the Save Local Business Act, and the Working Families Flexibility Act

Another way to overcome our current economic crisis is to empower people to find fulfilling work that gives them the freedom and flexibility they desire while helping them build personal and financial independence. What could be better during a time of such instability?

More and more, Americans are reaching their full potential through flexible work.

We need legislation that makes it easier for people to pursue independent, flexible careers. We also need to support policies that make it easier for workers and businesses to increase scheduling and work location flexibility. 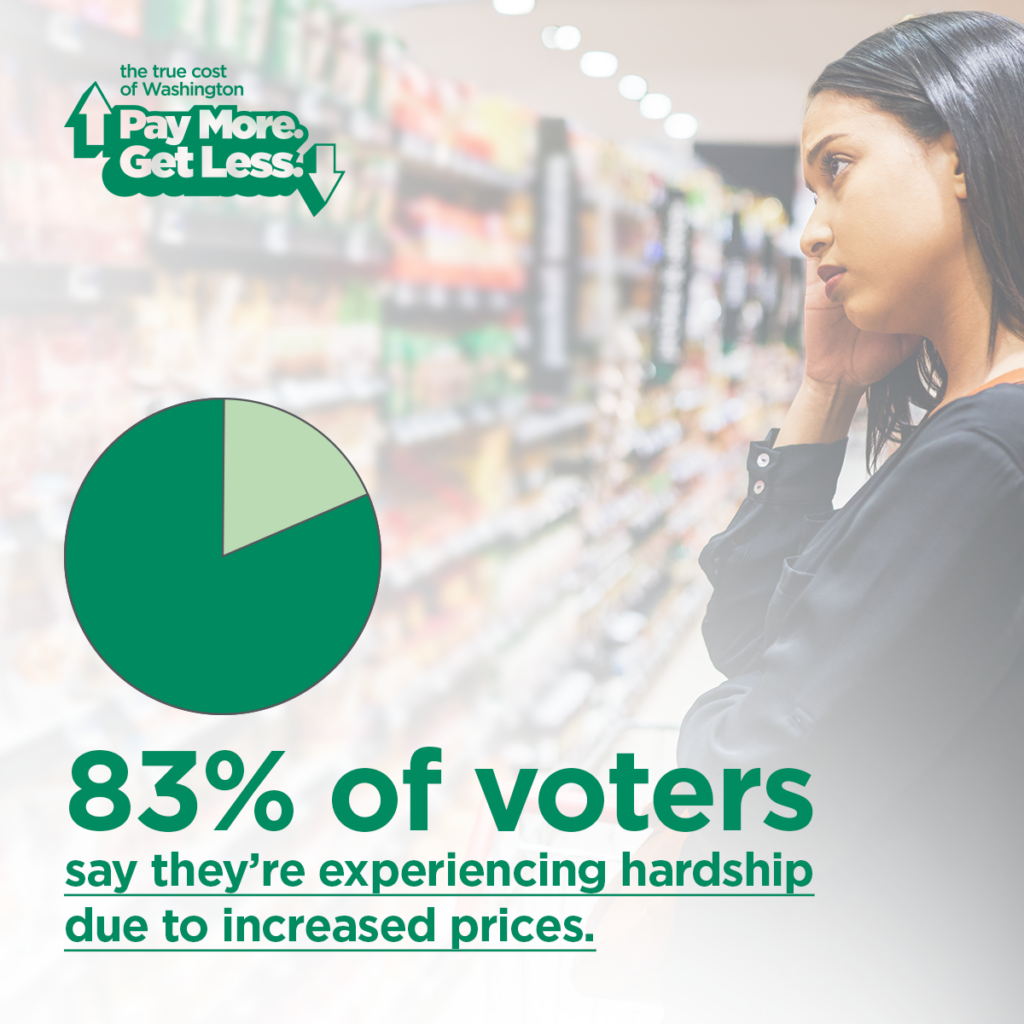 Earlier this year, Americans for Prosperity Senior Analyst for Employment Policy Austen Bannan laid out an agenda explaining how Congress can promote the flexible work arrangements workers and families need.

Trade regulations, from the outdated Jones Act to fertilizer tariffs, have also driven up the cost of food and everyday goods.

These regulations have hampered our economy’s ability to function to an embarrassing degree.

These barriers to trade have caused manufacturers to find other ways of shipping their products. Many have taken to the slower, costlier method of shipping goods by land. This is more expensive, a cost passed on to you when you’re shopping.

We need to repeal these outdated laws and make reforms to improve the efficiency of our ports. This would help fix our supply chain issues and lower costs across the board.

In addition, tariffs impose a huge burden on Americans’ standards of living. The Peterson Institute for International Economics has identified feasible steps to liberalize trade policy that could deliver a one-time reduction in consumer price index inflation of around 1.3 percentage points. That reduction would amount to $797 per U.S. household.

Congress needs to understand the true cost of its wasteful spending and overregulation — will you tell them?

More spending and more regulations are not the answer to higher costs.

We need a more organic approach, one that empowers entrepreneurs, business owners, and innovators to design solutions that make household goods and commodities more affordable and abundant.

Now is not the time for half-measures that only temporarily mask the pain. Now is the time for policies that will unleash energy abundance, end wasteful spending, and repeal harmful regulations that keep prices high.

Join the True Cost of Washington Tour today to advance these solutions for the high cost of living in America and help make life more affordable for all.