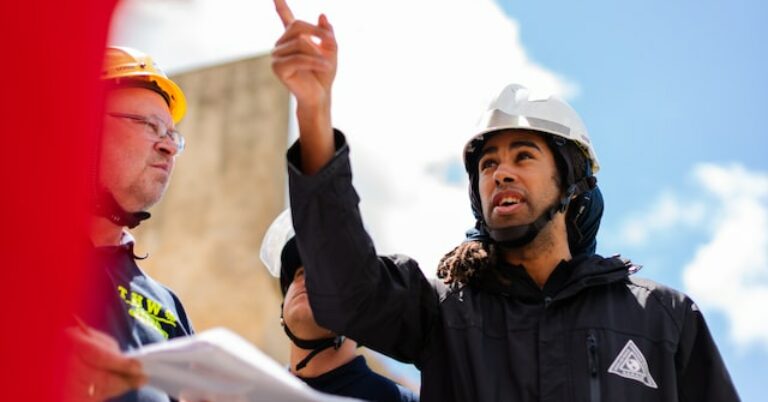 On March 22, Senator Tim Scott (R-SC) and Representative Rick Allen (R-GA) introduced the Employee Rights Act (ERA) in Congress. Americans for Prosperity has endorsed this legislation and the powerful policies within ERA that advance flexible work and worker choice, urging lawmakers to support as well.

The ERA would empower workers to seize more opportunity and take greater control of their careers and their futures. It would advance policies that empower workers and entrepreneurs to navigate today’s economy.

This stands in contrast to the PRO Act, which is imbued with a dated and rigid workplace vision that is increasingly displacing American workers.

So, what exactly is ERA?

What is the Employee Rights Act?

The Employee Rights Act is a bill that would advances policies that empower workers and entrepreneurs to navigate the 21st century economy successfully.

The ERA has several key features that would advance worker freedom and empower workers, families, and businesses:

ERA includes the Modern Worker Empowerment Act, which would institute the longstanding “common law” test as used by the Internal Revenue Service to determine if workers are independent contractors or employees.

Individual workers and businesses would no longer have to navigate confusing employment tests that differ across federal agencies such as the IRS, Department of Labor (DOL), and National Labor Relations Board (NLRB).

Just as importantly, it would stop the federal government from attempting to institute a harmful, California-style “ABC” test via legislation like the PRO Act or unilateral agency rules that would threaten the livelihoods of a growing community of over 59 million freelance workers. 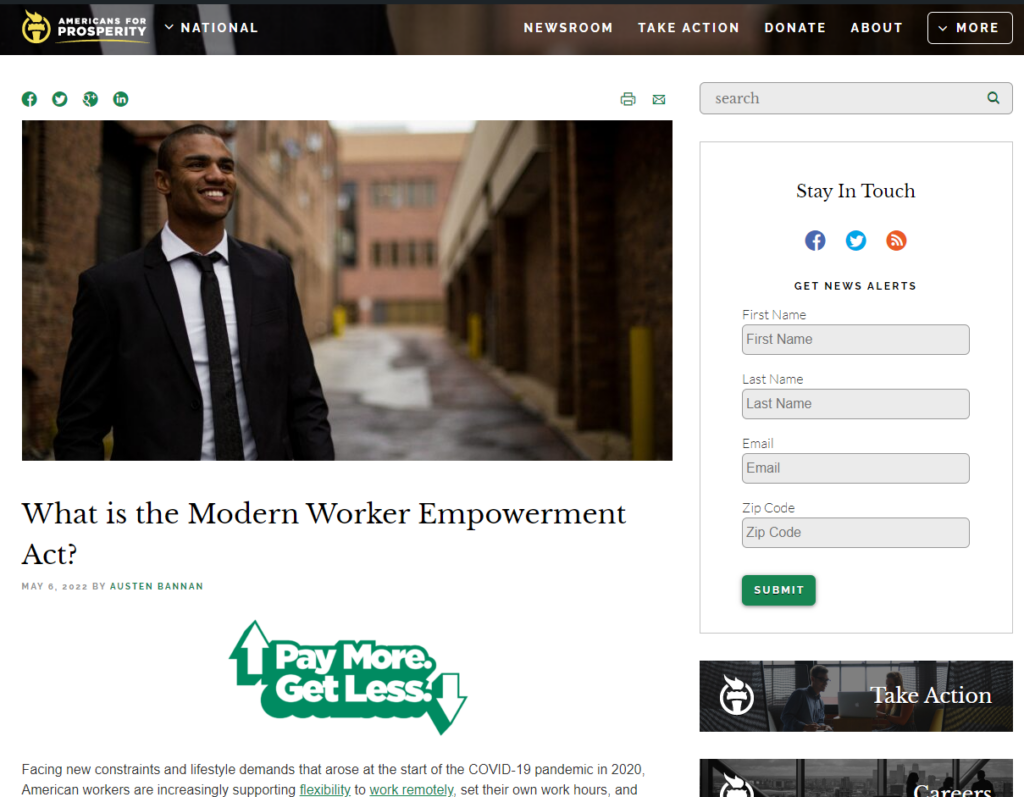 Today, businesses are legally blocked from providing certain benefits such as retirement incentives and health assistance to independent contractors that provide services for them.

The ERA would provide new voluntary options, opening the door to more beneficial relationships that improve opportunity for millions of people.

The ERA includes the Save Local Business Act, which would ensure the federal government’s joint employer standards protect  small and local businesses using vendor and franchise models through which entrepreneurs employ millions of Americans. 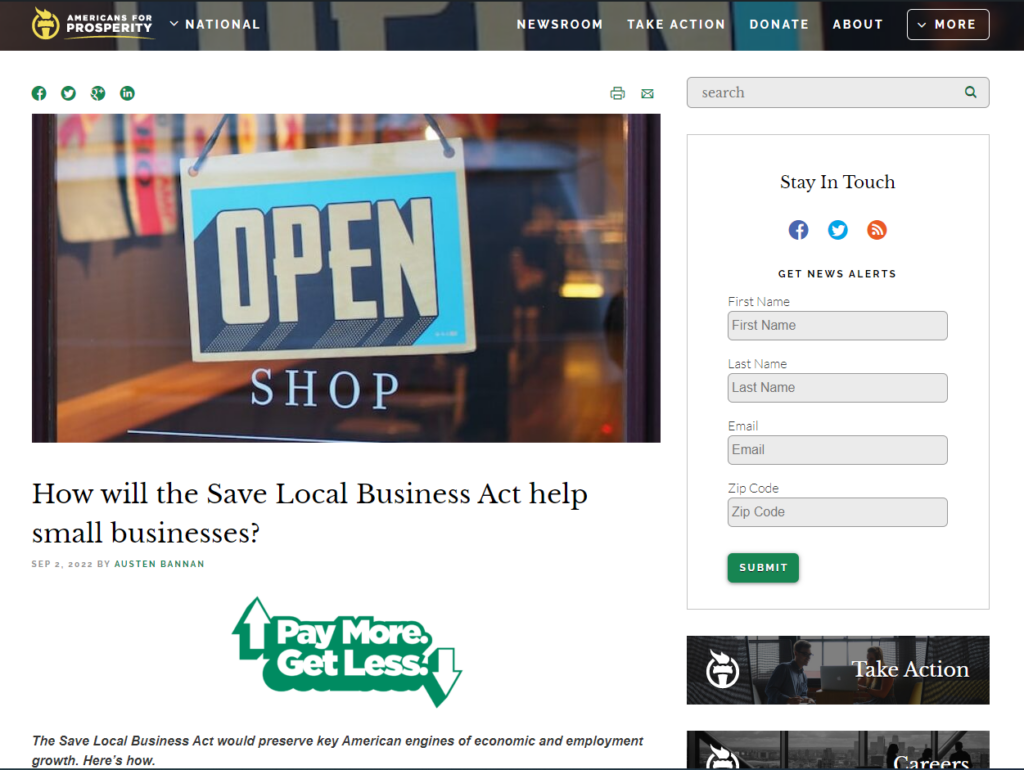 Much like American voters enjoy secret ballot protections voting for candidates in federal, state, and local elections, workers deserve and strongly support a permanent guarantee that their votes for or against union representation are secure and private.

This same secret ballot protection would extend to workers deciding whether a union will go on strike — a lifechanging decision where peer pressure and union pressure can be very high.

Most workers have never had a chance to vote for the union that represents them, which was formed years if not decades before they started their jobs.

The ERA gives workers a chance to vote on whether to retain a union as their representative when a majority of workers have declined membership.

Today, federal law requires employers to hand over personal contact information of employees to union leaders during organizing efforts. ERA would allow workers to opt-out of this process, preventing them from being contacted or even harassed by union organizers outside of the workplace.

The Employee Rights Act would provide protection from political spending

While not all union advocacy qualifies as political spending under ERA, workers will have to “opt-in” to have any of their paycheck used by unions to support political candidates or parties.

This provision ensures unions must secure majority support from all eligible employees, not a select group that could lead to a union being elected or rejected against the will of absent or unavailable employees.

These features contrast with the PRO Act, which would undermine self-employment, small business and vendor franchising models, worker choice concerning union representation, and relations between employers and employees in general. 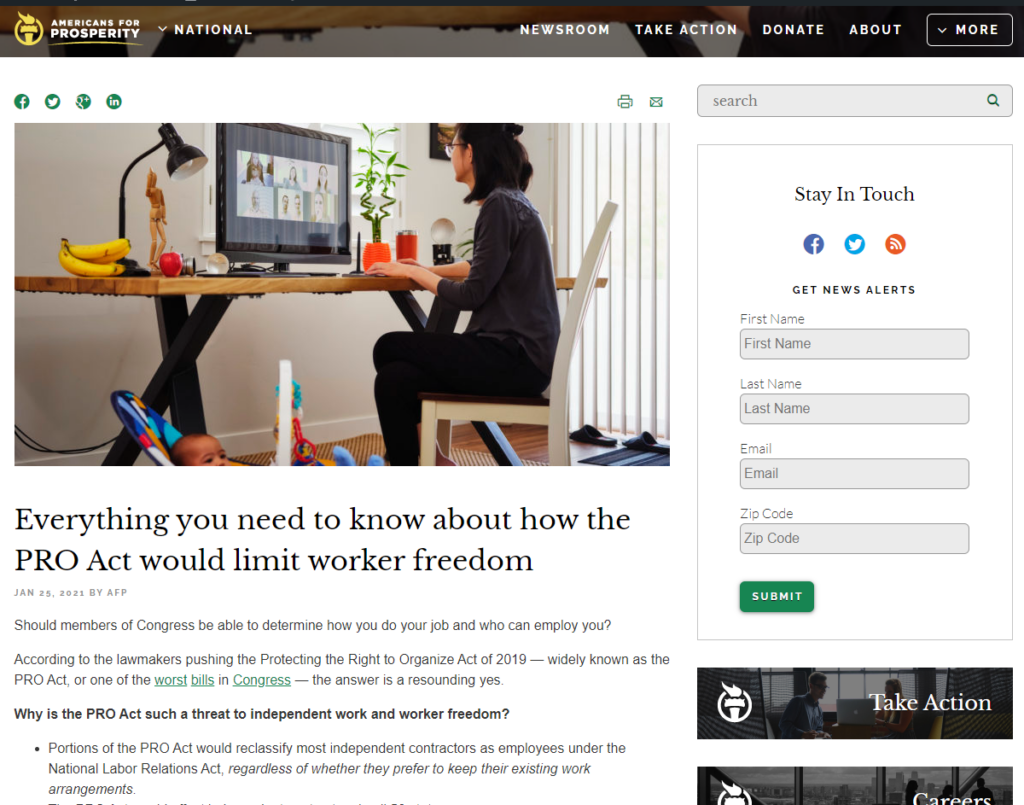 New technologies, lifestyle changes, and unpredictable events like pandemics have made the need for flexibility in the economy increasingly important.

The Employee Rights Act provides freedom and flexible work policies to help workers, families, and businesses thrive in a dynamic 21st century economy by giving them more choice and power over how unions represent them, greater protections in pursuing self-employment, and more certainty and protections to start businesses in their communities. 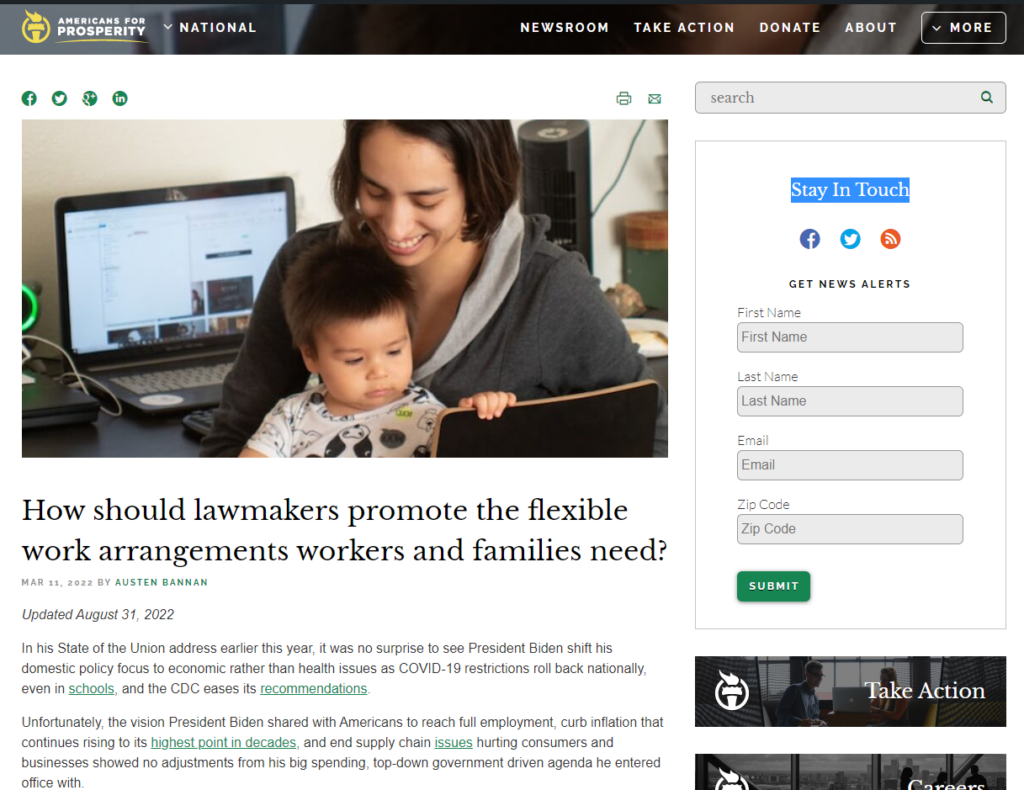 Learn more about AFP’s agenda to advance flexible work arrangements for all.