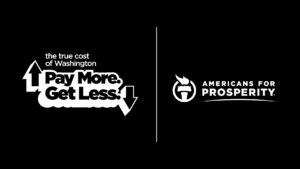 Arlington, Va. (April 6, 2022) – Today, Americans for Prosperity (AFP), the nation’s premier grassroots organization with chapters in 35 states and activists in all 50, announced the launch of its “The True Cost of Washington” campaign. The new grassroots advocacy initiative, which will engage citizens in nine states over the next five months, connects today’s rising costs of living to harmful government economic policies, offering solutions to make life more affordable for everyday Americans.

Who Is To Blame For Rising Costs?

Instead of empowering entrepreneurs, business owners, and innovators to design solutions that make household goods and commodities more affordable and abundant, Washington continues to take an increasingly top-down approach. The trillions of dollars in new spending that members of both parties have approved in recent years – coupled with antiquated regulations that stifle energy supply and economic growth – have produced nearly eight percent inflation, a level not seen in four decades. That translates to:

Voters are feeling the impact and 83 percent say they are experiencing some hardship due to increased prices on everyday items. Unfortunately, Washington’s rampant spending shows no sign of abating. President Biden’s recently 2023 budget would hike federal spending by $1.5 trillion over the next decade, on top of the trillions more that Congressional leaders are eyeing as part of an incremental separate partisan spending bill later this year. Meanwhile, roughly $700 billion from Congress’ previous COVID relief bills remains unspent.

Together with the ongoing supply chain crisis – a crisis caused by a surge in demand due to government spending coupled with regulations restricting consumer access to goods and energy – Americans are trapped in a perfect storm of economic calamity. It’s easy for politicians to blame these rising costs on geopolitical instability or scapegoat corporate greed. But the reality is, out-of-control government spending and burdensome regulations have been fueling the problem all along.

What Our “True Cost of Washington” Campaign Will Accomplish

Now is not the time for half-measures that only temporarily mask the pain. Our country needs to completely reimagine how to make life more affordable for everyday Americans. AFP believes that the best way to do that is through policies that, among other things:

The “True Cost of Washington” campaign will engage Americans on this truth throughout 2022 in nine states: Nevada, Georgia, New Hampshire, Arizona, Ohio, Pennsylvania, North Carolina, Wisconsin, and West Virginia. AFP local chapters will hold events in all nine states, as well as Washington, D.C. The organization will also run targeted ads on television, radio, and digital channels, both nationally and at the state level to rally support and encourage voters to make their voices heard.

“Americans are being crushed by the inflation caused by mountains of regulations and years of reckless spending from both parties,” said Akash Chougule, Vice President at Americans for Prosperity. “While politicians propose more of what’s gotten us here to begin with, we’re offering a better way that unleashes energy abundance, ends wasteful spending, and removes regulations that suppress the supply of energy and goods – sometimes intentionally.

“This campaign is the boldest we have launched to connect people to the truth behind rising costs and how we can finally deliver the financial security that all Americans deserve. I look forward to meeting with voters in local communities and hearing their concerns so we can bring their voices back to Washington.”

Tweet this: Inflation means Americans will pay an extra $5,200 this year. Wasteful Washington spending & regulations that limit the supply of goods mean we #PayMoreGetLess. It’s time to follow @AFPhq blueprint for lower costs.