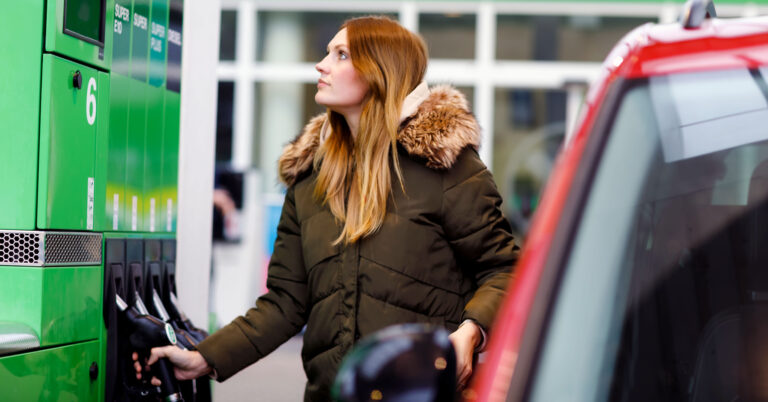 The national average for a gallon of gas for Americans has risen to $4.86, $0.80 cents higher than it was in March.

As Americans return to work and plan summer vacations they are faced with rising gas prices. (Not to mention higher costs for electricity, home heating, and groceries!!)

The price at the pump and for home expenses began to rise before the Russian invasion of Ukraine. At the end of 2021, President Joe Biden announced the U.S. Department of Energy will release 50 million barrels of crude oil from the Strategic Petroleum Reserve.

Energy experts told PBS interviewers that tapping the SPR won’t drive down gas prices. The decision was little more than “a drop in the ocean” when it comes to energy policy, one person said.

The decision also won’t counteract Biden administration policies that have caused rising energy costs — and that will continue to drive prices higher in the future.

Here are 25 decisions the president has made over the last year that have affected gas prices, home heating costs, and other energy-related burdens U.S. families and businesses face.

In November 2021, the Environmental Protection Agency announced new regulations governing methane emissions from oil and gas production, transmission, storage, and distribution that would cost more than $1 billion a year.

One of Biden’s first actions after taking office was to halt new oil and gas leases on federal lands and waters, the Biden administration has delayed decisions on these leases  — a move that results in higher energy costs for the most vulnerable consumers.

The administration canceled the Keystone XL pipeline and suspended oil and gas leases in the Arctic National Wildlife Refuge and New Mexico (despite opposition from the Navajo Nation). It also resurrected the “Waters of the United States” rule, which would increase barriers to energy projects.

The White House is pursuing new standards for particulate matter and ozone, likely tightening them to unachievable levels for much of the country and creating new barriers for energy project permits.

The president also has rescinded Endangered Species Act reforms, a move that will increase red tape and allow litigation to slow down energy projects.

In April 2021, without the consent of Congress, Biden rejoined the Paris agreement, which will result in onerous new regulations that could raise energy costs.

The president has created several bodies within the White House charged with creating new policies to regulate energy. The people who run these councils are unelected and do not need Senate confirmation, but they have been given broad powers to come up with new executive actions — which do not need consent from Congress — to regulate U.S. energy production.

One section of the recently enacted Infrastructure Investment and Jobs Act, supported by the White House, would require every U.S. state to develop state carbon-reduction plans that must be approved by the U.S. Department of Transportation as well as be updated every four years.

These plans are aimed at reducing driving all over the country — even for people in rural areas where public transportation is limited, and driving is the only option.

The Biden administration has failed to take adequate action on annual requirements and small refinery waivers for the Renewable Fuel Standard and in providing regulatory relief from this biofuel mandate due to economic hardship. His EPA  has finalized a new rule regulating greenhouse gas emissions from cars and trucks. That single regulation could raise the average vehicle price by $1,000.

This carbon pricing policy statement, issued by the Federal Energy Regulatory Commission in April 2021, is a blanket endorsement of top-down policies that have been demonstrated to be costly, ineffective, regressive, and consistently rejected by the American people.

The EPA has issued a final rule to phase out a common, inexpensive refrigerant. This policy is a de facto tax on air conditioning and refrigeration.

In May 2021, Biden issued a sweeping executive order that mobilized federal agencies, including the Securities and Exchange Commission, to enforce mandates on businesses, insurers, retirement funds, and suppliers. These policies will stifle innovation critical to improving the environment and will increase costs for a wide variety of businesses.

The Biden administration has changed key inputs for economic and regulatory analysis, including raising the “social cost” of greenhouse gases. These policies will mask the true consumer cost of regulatory actions.

The administration attempted to resurrect an aggressive version of the Clean Power Plan for power sector mandates called the Clean Electricity Standard.

In the Fall 2021 Unified Agenda, the EPA stated their intention to propose what can be considered the Clean Power Plan 2.0. This policy would impose burdensome regulations but would have little or no environmental benefit.

The EPA also has mandated that even facilities with reduced emissions must remain on the list of “major” sources, subjecting these facilities to permitting burdens and higher costs.

The administration is considering potential restrictions on the export of crude oil that would increase, not decrease, energy prices.

The Build Back Better agenda would spend taxpayer dollars to push utilities to adopt more costly, politically preferred forms of energy, a move that would reduce Americans’ energy choices.

#25: Fueling the fire for future regulation

Finally, through the Civilian Climate Corps, Build Back Better would fund the salaries of tens of thousands of anti-energy activists who would perpetuate high energy costs by demanding new and costly federal regulations and legislation.

Unlike releasing oil from the Strategic Petroleum Reserve, these 25 steps are not just a “drop in the ocean.”

They have made, and will continue to make, a significant impact on Americans’ ability to afford the energy products that fuel their lives and livelihoods.

Join the the True Cost of Washington Tour, the movement to lower the cost of gas in 2022 and make life more affordable for all Americans.