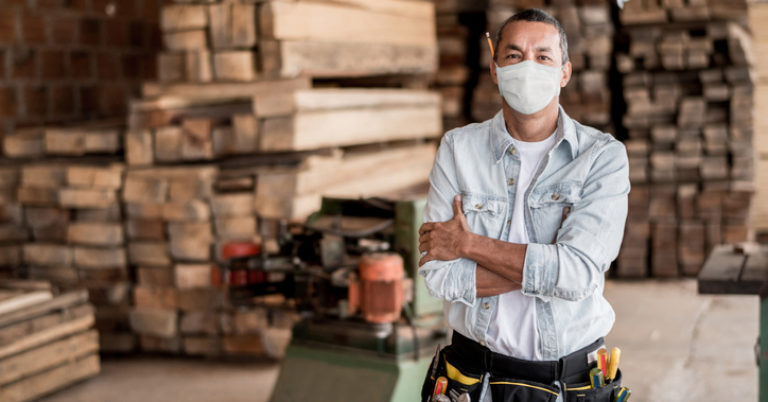 President Biden’s $4 trillion “infrastructure” package would do very little to improve infrastructure, but it would make it much more difficult for American workers, particularly independent contractors, to support themselves and their families.

The proposal is chocked full of policies that would harm worker freedom and opportunity, including:

How would these policies affect workers?

Among the many provisions of the president’s plan is the Protecting the Right to Organize Act, or the PRO Act, a job-killing bill that some lawmakers have tried to pass through Congress since 2019.

The bill would, among other things, allow the National Labor Relations Board to penalize businesses for hiring independent contractors. 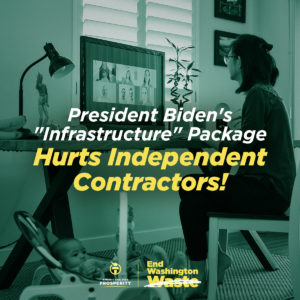 Using an “ABC” test to determine whether a worker should be classified as an independent contractor or traditional employee, regulators could end up blacklisting millions of these workers from their own jobs.

That would be catastrophic, especially as we continue to recover from the COVID-19 pandemic.

And while lawmakers hope that businesses would simply hire their independent contractors back as traditional employees on a W-2, many would be unable to do so, and many workers would not want to go that route.

When California’s Assembly Bill 5 implemented a similar measure, countless independent contractors lost the ability to work and provide for their families.

Upending right-to-work laws in all 50 states

The PRO Act doesn’t stop there. The bill contains a provision that would repeal right-to-work laws in every state. 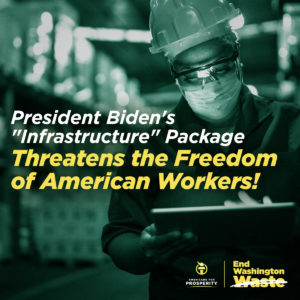 These laws guarantee that no worker can be compelled to join or pay a union. And despite the president’s promise that all workers will have the “free and fair chance to join a union,” millions would be deprived of the free and fair choice not to join.

This would not only erode worker freedom, but also hurt worker opportunity. After all, right-to-work states typically boast higher incomes and lower jobless rates.

Overriding these state right-to-work laws would only benefit union leadership. Workers and their families, meanwhile, would take a hit.

The package is a handout to labor unions

Echoing throughout the president’s proposal are high-dollar projects designed — explicitly, in some cases — to benefit unions.

Many of these projects focus mainly on the use of union labor, rather than the construction of America’s infrastructure. Union leadership – and not the workers – in utility construction, transportation, and telecommunication would reap the benefits of the government’s latest drive to spend trillions of taxpayer dollars.

What’s more, prevailing wage standards maintained by the federal government — including the Davis-Bacon Act, which makes the construction of infrastructure more expensive — would be part of this spending spree.

Prioritizing union profits over infrastructure means the federal government will not be able to build as much with the money it has. Union bosses will benefit from government favoritism, but taxpayers will pay the price.

“If we don’t build as much, that means we aren’t going to get as much economic benefit out of it,” said University of Missouri professor Aaron Hedlund, who served as chief domestic economist on the Council of Economic Advisers.

It also means that the vast majority of American workers, including independent contractors, would be excluded from these projects.

Lawmakers should reject the president’s so-called infrastructure package. Many of these proposals would erode worker freedom and opportunity, to the benefit of union leadership.