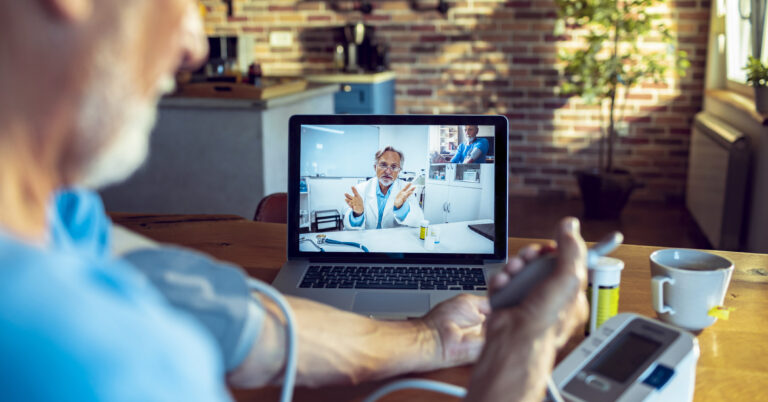 West Virginia has long struggled with a lack of access to quality, affordable health care.

Fifty-four of its 55 counties are classified as, at least in part, health care shortage areas. The state’s mountainous terrain can make it extremely difficult for patients in rural areas to find care, particularly for those with limited mobility.

These concerns became particularly pressing during the COVID-19 pandemic. To make matters worse, West Virginia, like many states, keeps laws on the books that make care hard to find and afford.

To meet the health care challenges of COVID-19 — and beyond — West Virginia lawmakers needed to act quickly. So, they relied on the leadership and expertise of Americans for Prosperity-West Virginia, its activists, and its coalition partners.

Americans for Prosperity-West Virginia has worked with AARP-WV on several health care issues — among them, scope-of-practice restrictions, and telehealth expansion — since 2016.

The two organizations have made much progress in the fight to expand health care access and choice in West Virginia. And when the pandemic reached our shores, the groups worked quickly to provide expert advice to lawmakers on how they could meet the needs of Mountain State patients.

Among their recommendations were removing the state’s scope-of-practice regulations, which restrict the number of providers able to deliver care, and scrapping burdensome regulations that prevent providers from offering telehealth services.

Governor Jim Justice relied heavily on these recommendations. In March of last year, he suspended several telehealth restrictions, including regulations that prevented out-of-state providers from offering their services to West Virginians and that prohibited the use of non-video telehealth.

But there was a downside: The governor’s emergency order was temporary. When it expired, so would these reforms.

Legislation was needed to codify these reforms in law. So, Americans for Prosperity-West Virginia’s leadership, activists, legislative champions, and allies began advocating passage of a bill that would keep these changes on the books.

“We ask [the governor] to further expand access to tools and telehealth systems that are able to really help reduce the burden on the overall health care system, and really help increase this social distancing concept that is so important right now.”

Huffman, Katebi, and West Virginia Director of Grassroots Operations Tyler Henry began reaching out to lawmakers, too, sharing the best ways to make telehealth easier for patients to access.

“We are a factory for good ideas,” Huffman said. “Lawmakers are looking for solutions to problems, and we help make those solutions a mutual priority,” adding that “Americans for Prosperity-West Virginia has established itself as one of the foremost policy advocacy organizations in the state.”

This past February, lawmakers took much of that advice. They authored and introduced House Bill 2024, which codifies the governor’s telehealth reforms into law.

Americans for Prosperity activists were alert about the bill, sending letters to their lawmakers urging them to support a personal option — which puts providers and their patients at the center of medical care, rather than government bureaucrats — in their health care.

Both the state House and Senate passed the bill in March. By April, Justice signed it into law.

After the passage of HB 2024, Huffman and AARP-West Virginia’s Gaylene Miller authored an op-ed in the West Virginia Press taking a look back at the state’s successful telehealth reform and congratulating lawmakers on their efforts.

The plan [to expand telehealth] was such a success that, in April, lawmakers passed a bill, HB 2024, that codified the governor’s telehealth reform into law. Our organizations, Americans for Prosperity and AARP, leveraged our unique partnership to work alongside principled lawmakers to support the passage of this bill at every step along the way.

With passage of this bill, more West Virginians will be able to access telehealth services than ever before. That will be particularly helpful for rural patients — a UC Davis Health study found that, between 1996 and 2013, remote care saved their patients nine years of travel time, five million miles, and $3 million in costs — and for anyone in need of quick, convenient, and affordable care.

“We care about affordability,” said Katebi, who provided much of the policy muscle behind AFP-West Virginia’s effort to get HB 2024 passed. He noted that the average cost of a telehealth visit is around $79, compared to $146 — nearly double the price — for in-person care.

“HB 2024 represents recognition on the part of lawmakers that we must do better and that there are proven policy solutions to help get us there,” Huffman said.

Of course, telehealth will prove to be an indispensable tool for doctors to fight the COVID-19 Delta variant.

In the meantime, other states should focus on removing their barriers to telehealth. West Virginia has shown how these reforms can be successful. They could lead the way for other states to do the same.

Support a health care personal option today to remove barriers to quality, affordable care for all.