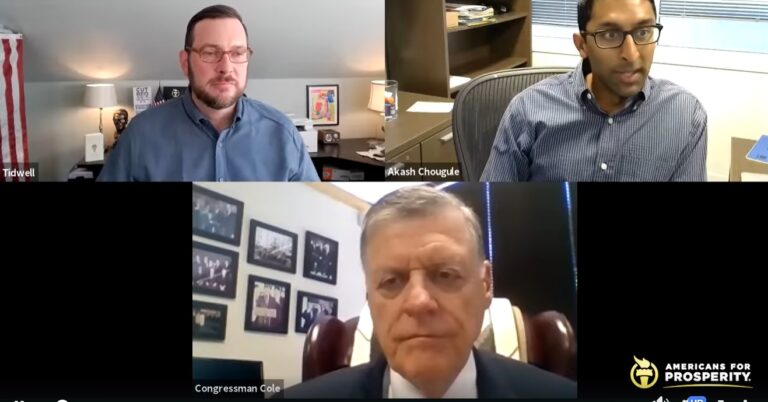 The House of Representatives will return early from its summer recess to consider Democrats’ $3.5 billion budget resolution and the Senate-passed $1.2 trillion infrastructure bill.

When it comes to health care, for example, Cole said the budget resolution would expand government-run programs. “Essentially this is a Democratic-effort to nationalize the American health care system one step at a time,” said Cole.

An alternative would be to enact policies like health care savings accounts that “empower the individual to make their own decisions,” Cole offered.

The budget resolution would increase spending on Medicare and Social Security — two programs already on the path toward bankruptcy:

“We need to reach back toward fiscal sustainability, but this [legislation] would be the most dramatic expansion of the welfare state since the Great Society programs. What’s at stake here is a lot more than the price tag of the bill; it’s really the longevity of these programs.”

Cole explained that tax legislation must originate in the House, and that a bill-writing process will kick off only if House lawmakers approve the budget resolution.

Cole warned Democrats’ spending appetite is unlikely to end any time soon — even if the House approves the budget resolution and infrastructure bill. Cole reported a Democratic House colleague told him the party is “like hogs at a trough,” hoping to “eat all they can” before Democrats potentially lose control of the House in the 2022 elections.

Thankfully, as Cole explained, concerned Americans do not have to wait until November 2022 to make their voices heard. The fights against the $1.2 trillion infrastructure bill and the $3.5 trillion budget resolution are far from over.

There is still “a long way to go,” said Cole. “We need to stop this stuff now.”

“This is the narrowest congressional majority since 1884,” said Cole. “On any given day, three or four votes can change everything in the House. … This is still in the hands of the American people.”