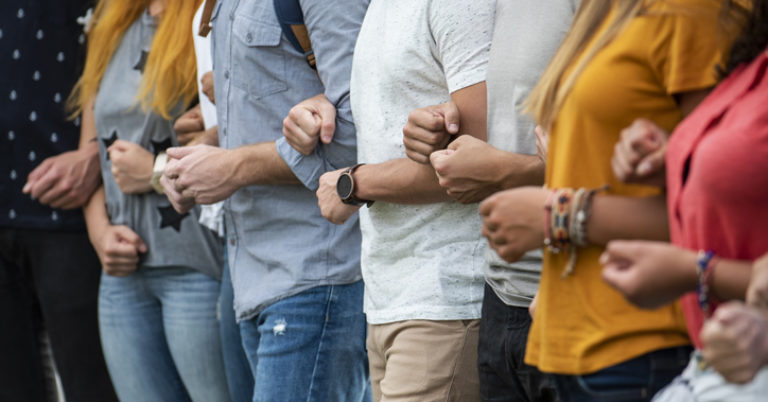 College campuses and free speech are closely linked. Universities are where the next generation finds its voice and (hopefully) learns crucial lessons civil liberties —both how to exercise and defend them.

With the 2021-2022 school year beginning, many students will be returning to physical classrooms for the first time in as many as 18 months. They’re doing so amidst a highly charged environment. It’s a great time to remind all involved of the importance of free speech.

Historically, during times of tension and distrust, American college campuses are a flashpoint. College students are often young, full of passion and idealism, and congregated in close proximity.

While the United States as a whole has seen an increase in activism and demonstrations over the last 18 months, relatively few occurred on college campuses because schools moved to virtual classrooms and students returned home.

But as students return to campus, we should expect that the policing, racial justice, critical race theory, COVID-19, and other political and cultural disputes that have inspired so much debate off campus will now return with them.

That’s good news! What better way for students to learn the value of First Amendment freedoms than exercising them?

Here are three ways public universities can be preparing:

The First Amendment protects students’ right to organize student groups, invite speakers, and protest on public campuses whatever the issue. And even many private colleges have made promises of free speech to their students, recognizing that discourse and debate are critical to education.

University leaders should review their campus speech policies and codes to confirm they protect and prioritize free speech.

The Foundation for Individual Rights In Education reviews campus speech policies and rates them here, a tremendous resource for university officials. Limits on when and where students may speak outdoors, who they may associate with, or what they may say to one another are all constitutionally suspect.

Unfortunately, restrictions like these are all too common. For example, Michigan community college officials had members of a student group arrested for distributing the Constitution on campus on Constitution Day!

2. Connect students to resources to know their rights

As Jonathan Haidt and Greg Lukianoff have noted, in recent years illiberalism on campus has often been driven by students themselves. Some demand that others not be permitted to speak.

It’s not enough then to get the college’s policies right. University leaders have the opportunity to educate students about their freedoms and how to respect others’ First Amendment rights as well.

At freshman orientation and throughout the college experience, faculty and administrators can connect students to the value of free speech for themselves — and even those whose ideas they detest.

3. Look for tools to allow for productive dialogue and debate

The last 18 months have been unusually and uniquely difficult, and students have been isolated from each other, cut off from forming meaningful connections in person.

Research from social scientists shows that personal experiences are effective in fostering respect and thus bridging moral and political divides, and listening is more productive and constructive than silencing or shouting someone down.

Colleges help to produce and shape our society’s future leaders and citizens, so it’s important that these institutions prepare students to engage and collaborate with competing and challenging perspectives, even when they disagree, in order to find solutions.

If you’re interested in learning more about how AFP protects First Amendment rights, check out our additional civil liberties content: