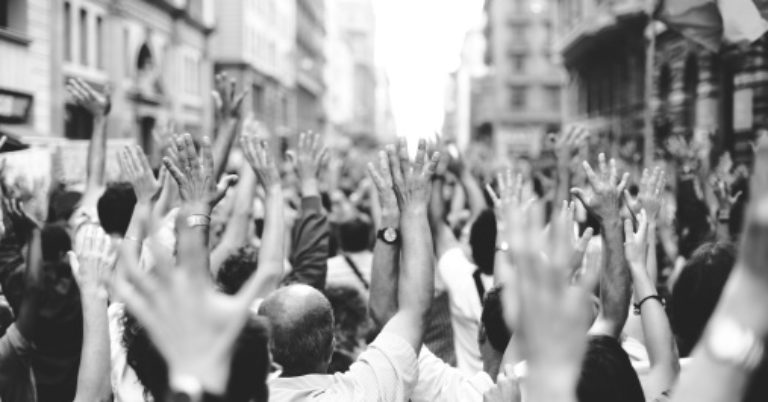 In defense of protest: Why speech can address injustice, and violence must be condemned

The four citizens are not protesting. They’re simply wearing their shirts and searching land records. So which one is violating resolution 2020-3957, which sought to regulate free speech on county properties? They all might be violators — and county officials can require they leave.

The resolution states that “the interiors and exteriors of county-owned buildings are not open to the public for the purpose of free speech expression and are expressly reserved for the exclusive functioning of county government and the courts.” But are these four people really breaking the law? They’re searching public documents — if they aren’t protesting or disrupting county business, how are they doing anything wrong?

This scenario may sound implausible. But vague, overly broad speech restrictions are common across the country. And in a politically divided nation, Americans are seemingly united only by their desire to silence opposing viewpoints. The stakes cannot be overstated. Our ability to engage with new ideas and with each other is not only the most fundamental of liberties but essential for developing solutions to national dilemmas. To quote James Madison: “For the people to rule wisely, they must be free to think and speak without fear of reprisal.”

In an era of deep political polarization, we need to remember some key facts about free speech:

The ability to protest is a fundamental right

Throughout U.S. history, protests have provided a critical means for Americans to amplify their individual voices by standing together.

The civil rights movement helped advance the cause of liberty and equal rights for all Americans. The annual March for Life regularly draws tens of thousands of Americans to Washington, D.C., to raise awareness about abortion laws. In 2009 and 2010, the Tea Party brought together people across the country to protest government-sponsored universal health care and government spending. After the Marjory Stoneman Douglas High School shooting on Valentine’s Day 2018, more than 1 million people in the United States participated in The March for Our Lives to raise awareness of gun violence. In 2020, Americans continue to exercise the right to protest across a wide spectrum of issues: protesting COVID-19 mandates, police misconduct, and school closings, among others.

Protest is deeply American. As Gene Policinski, president and chief operating officer for the Freedom Forum Institute notes, “we are a nation of dissenters.”

Little wonder America’s Founders protected the rights to peaceably assemble and petition, to speak freely, and related liberties in the First Amendment of the Constitution — securing those liberties in the Bill of Rights. These freedoms are the bedrock of all others. They are the best defense against injustice and the means by which a free people remain so.

Our rights are bound together. When we protect the rights of one set of people but not another, our foundational freedoms erode. And if laws are written too vaguely or enforced unevenly, people in power can arbitrarily shut down protests and silence political speech they don’t like.

In the late ‘80s, the University of Michigan instituted a speech code aimed at curtailing an ugly trend of race-based incidents. Not only did the speech restrictions not stop the incidents, white students began to use the new restrictions to charge black students with offensive speech. More than 20 charges were filed in the 18 months between when the code was implemented and when it was struck down. The example shows how the first targets of censorship are rarely the last.

Laws don’t even need to be explicitly censorial to be used for that purpose. The average American unknowingly commits three crimes per day, some scholars and lawyers estimate. The reason: America has an overabundance of criminal laws, many of which are intentionally vague — and which could be used to silence citizens’ speech.

For instance, in 1968 Los Angeles officials arrested and convicted Paul Cohen for “maliciously and willfully disturb[ing] the peace or quiet of any neighborhood or person . . . by . . . offensive conduct.” Cohen’s offense? Wearing a jacket with a four-letter message criticizing the draft. Nearly half a century later, a Michigan community college cited violation of its solicitation policy to justify having several students arrested. Their crime? Distributing pocket-size copies of the U.S. Constitution in an open area of the campus. Both are examples of how laws can be used to suppress speech on either side of the political spectrum.

Violence and destruction of private property are never the answer

Unjust acts of violence aren’t remedied by more violence, and we should speak out against both. One just as surely as the other violates our nation’s commitment to equal rights and disregards the inherent dignity of every person. Resorting to violence in support of a cause assumes that one person’s rights to life, liberty, and the pursuit of happiness are worth less than another’s right to protest.

Defending civil liberties is crucial, whether protecting protesters from overreach by public officials or defending citizens whose rights are violated by vandalism or physical assault. Rioting is not free speech. And the victims of rioting are often members of the communities for whom rioters claim to be advocating. In Minnesota, following the 2020 killing of George Floyd, rioters damaged as many as 90 percent of markets, restaurants, and community organizations in one local corridor — many started and run by residents now questioning how to rebuild. Communities affected by riots often take years to overcome the economic devastation.

Moreover, violent clashes can leave people injured or killed. Research confirms an overwhelming majority of Americans share these concerns. One August 2020 Yahoo News/YouGov poll found three in four adults say they support peaceful protests but not violence, and 73 percent somewhat or strongly agree that violent protest is never justified in the U.S. as a way for a group to accomplish its goals.

As nonviolent movements led by Gandhi, Martin Luther King Jr., and others have shown, peaceful protests are the most effective way to make progress. In a study of 323 violent and nonviolent campaigns, Harvard scholar Erica Chenoweth found nonviolent efforts were twice as likely to achieve their goals as violent ones. Looting, harassment, and intimidation not only turn peaceful resistance violent, but they can also lead to further polarization — entrenching people in opposing sides rather than fostering a willingness to listen and come together to address problems.

This is a critical time for free speech in the United States.

Rather than impose blanket bans, public officials should ensure that any orders restricting civil liberties are narrowly defined, time-limited, consistent, and subject to frequent periodic reviews. Vague and overbroad language can enable those in power to punish peaceful protesters. Constitutionally protected activities should not be more restricted than other activities, and any restrictions on assembly or speech must apply to all in the same way.

Peaceful protest, free expression, and free assembly are foundational rights for all Americans and a source of great pride. These rights set us apart in the world, and they are essential catalysts for progress. Ida B. Wells once said, “the way to right wrongs is to turn the light of truth upon them.” These rights, and the ability to shine a bright light, belong to all of us.