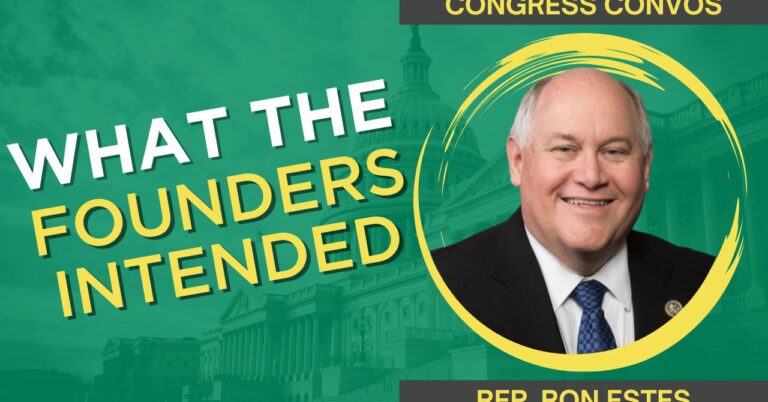 With inflation at record highs, spending continuing to skyrocket, and everyday Americans struggling, it’s obvious that America is in dire need of a change of course. “It’s actually becoming the kind of business that our forefathers ran from in order to start America,” Representative Ron Estes told Americans for Prosperity.

So where did we go wrong and how do we fix our current dilemma? Representative Estes sat down with AFP-Kansas State Director, Elizabeth Patton, to tackle the issues in the latest “Congressional Conversations” discussion.

According to Representative Estes, the problems in Washington are deeply rooted. He sees politicians losing touch with America’s founding principles, a lack of economic know-how, and what appears to be purposefully misleading statements made by the current administration.

Losing touch with our founding principles

For Representative Estes, many of America’s current issues can be traced back to a lack of adherence to our founding principles and democratic process. He shared that one of the most staggering statistics is that only a third of the federal government’s yearly spending is actually brought to a vote in Congress. The rest is automatic.

“We’re not running bills through the committee process, we’re not following regular order so we can have debate,” he said. “It’s been a long time [since] that process has started to break down, but we’ve really seen it be terrible the last two years.”

It should have come as no surprise to the Biden Administration that injecting $1.9 trillion dollars into the U.S. economy with the American Rescue Plan would lead to spiraling inflation.

However, as Representative Estes noted, many of his democrat colleagues seemed surprised after inflation skyrocketed soon after Biden’s signature piece of legislation was passed in March 2021.

“It’s really unfortunate that they really don’t get it,” he said.  “And my colleagues still don’t get it. They still think ‘oh the solution to that is to spend more money’ and in reality, that’s what caused the problem.”

With a name like “Inflation Reduction Act,” it would be logical to assume that such a bill would tackle inflation. However, Representative Estes pointed out that there is a complete lack of transparency in what a bills name implies it will do versus what it actually achieves.

In fact, he calls the “Inflation Reduction Act” a ‘propaganda name.’ While the name implies it will reduce inflation, it actually does the exact opposite.

“This so-called inflation reduction act wastes money on a lot of things, for example hiring 87,000 more IRS agents,” he explained. “It’s false advertising is really what it is and unfortunately the American people are going to suffer through it because we’ve already seen the IRS be used as a political pawn.”

Representative Estes said that while the current state of America is far from ideal, the future looks promising. He is working with colleagues to reduce regulatory burdens on businesses, addressing the deficit, and bringing America back to the state our forefathers envisioned.

“It’s so important to talk about ‘what do we do?’ and ‘how do we move our country forward?’,” he asked. “We need to be following regular order and we need to value the process that was intended – that we have debate in the chamber, we have debates in committees, bills get brought to the floor so we can debate them.”

Watch our interview with Senator Marsha Blackburn for more ideas on how we can boost growth and cut inflation for all Americans.