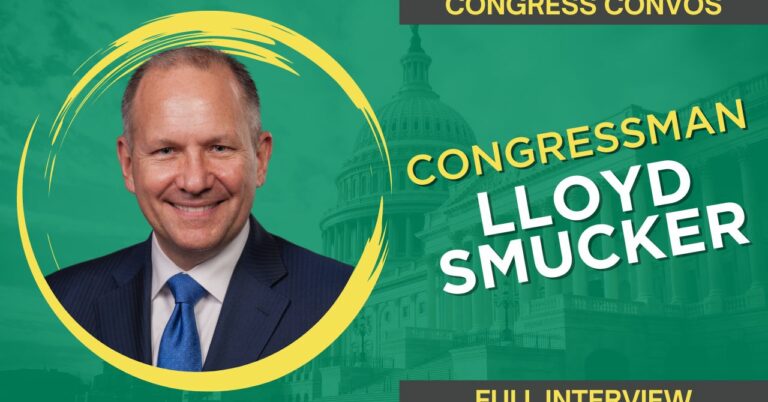 Representative Lloyd Smucker ran a regional construction company for 25 years. He knows how to balance a budget, spend responsibly, and keep his business running smoothly.

However, serving as a representative for Pennsylvania has unfortunately taught him that many of his colleagues don’t have the same business sense or economic know-how.

Representative Smucker spoke with AFP’s Akash Chougule to discuss what’s causing America’s current economic crisis and what can be done to right these wrongs before it’s too late.

The cause of America’s spiraling inflation

The days where inflation wasn’t on the minds of everyone American may seem like a distant past. However, it was only a few years ago when America’s economic policies were on solid footing.

“We had a great example of a recent time when economic policies worked very well and it was after we passed the Tax Cuts and Jobs Act (of 2017),” explained Representative Smucker. The average American household saw their tax bills go down and their incomes increase by about $6,000. So what went wrong?

“It’s a classic economic formula,” said Representative Smucker. He then went on to explain how the Biden Administration increased demand by printing trillions of dollars and decreased supply by curtailing the production of energy. This, quite predictably, caused prices to soar.

“That’s not to say that energy supply across the world didn’t affect Europe. That’s not to say even supply chain issues and COVID didn’t,” Representative Smucker explained. “But by far the biggest impact was this massive spending spree that this administration has been on.”

“Yet it seems like the Biden Administration doesn’t see that or doesn’t care,” he said.

“We predicted (inflation) when they passed the American Rescue Plan, we predicted it in subsequent bills after that when they continued to spend — we’re now up to a price tag of about $10 trillion in additional spending from this administration. I mean, it’s unbelievable!”

How inflation is hurting everyday Americans

“It’s incredibly frustrating to me to see how the policies of this administration have impacted people in the district I represent. People are worried. I was even talking to one person just a few weeks ago who had been retired for ten years but came back to work, took a job at a local foundry just to make ends meet.”

However, this isn’t an isolated story. Many of Representative Smucker’s constituents voice similar concerns.

“I have people telling me that they are deciding each week if they can put food on the table or put gas in their car,” he said. “Many people I have talked to are delaying retirement. They’re seeing the impact on their 401ks. They’re seeing with everything they are buying; prices are up dramatically.”

The roadblocks to a strong economy

Even more frustrating for Representative Smucker than the effects of spiraling inflation, is knowing things didn’t have to be this way.

“It’s very, very frustrating when we know opportunity is available for us,” Representative Smucker said about his own district. “Pennsylvania could be the economic engine for the country and could be the engine that leads us to energy independence.”

From cumbersome permitting processes to stringent regulations, Pennsylvanians constantly find themselves held back.

“People in Pennsylvania want to go to work producing energy. Companies want to do business here. They’re faced with a regulatory environment that makes it difficult to do that,” Representative Smucker explained.

“It’s particularly frustrating to Pennsylvanians when you see the president fly around the world to try to convince people that are not always our allies to produce dirtier energy,” he said. “He could have flown right here to Pennsylvania!”

“(My constituents) can’t afford the policies of this president any longer.” he added. “They want change.”

Representative Smucker understands that pulling our country out of the economic mess it is in requires immediate action.

“We want an economy that is strong. That is working for the American people. We want to drive down the cost of goods to reduce inflation. We have a plan to do that — stop the trillions of dollars in spending and unleash American independence.”

“The way we spend taxpayer dollars in Congress is completely broken. It’s a terrible process,” he explained. “We want to hold this government accountable. A key function of Congress is oversight.”

However, Representative Smucker also knows he needs as much help as he can get to hold the government accountable. “It’s important for people to speak up, people to engage. If we’re not doing that then we are leaving it to someone else.”

Watch our interview with Representative Kelly Armstrong to hear more about how inflation is hurting everyday Americans.