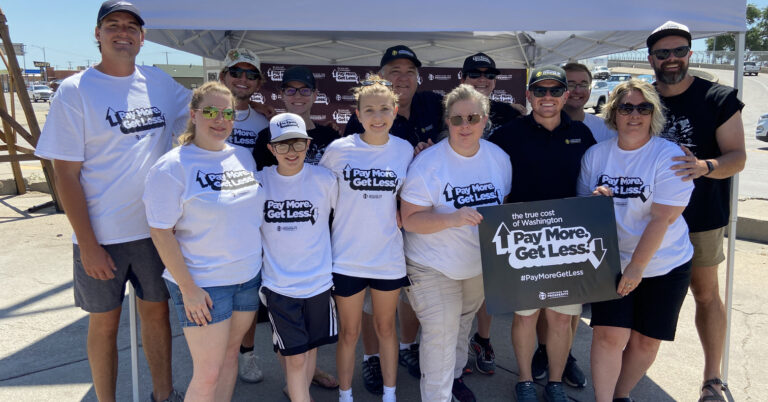 As summer temperatures have spiked, so has U.S. inflation.

To give Americans some relief from rising prices, Americans for Prosperity activists have traveled the country rolling back the cost of a gallon of gas to the price it was when President Joe Biden took office.

“[It] was great to feel a bit of nostalgia after Biden’s policies caused a bump at the pump,” Representative Bill Johnson said after joining AFP in Poland, Ohio, to roll back gas prices to $2.38 per gallon for customers.

⛽️🚨: Just left Morgan Oil in Poland, OH where gas prices were temporarily lowered to $2.38 a gallon today — the average price of gas when Biden first took office in 2021. Was great to feel a bit of nostalgia after Biden’s policies caused a major bump at the pump. @AfpOhio pic.twitter.com/hrQgX0pe4R

The True Cost of Washington Tour has generated a significant amount of media attention and support from state and federal policymakers who are eager to enact new energy policy solutions that will help their constituents make ends meet.

Below is a sample of what these leaders have said about the tour.

“The top two biggest issues are gas and groceries. That’s what everybody talks about. It transcends everything. And you look at what inflation has done and it’s really a tax on the American people. The people that make the least are the ones that are most affected by it.

Two weeks ago at a gas station in Peoria, Ill. in my district … we lowered the price of gas with an organization, Americans for Prosperity, to $2.38. … For two hours, we literally had people lined up for miles.

I talked to a lot of those folks. Single moms. Working families. Low-income folks that were filling up with gas and just extremely frustrated. … People that are fearful of what’s going on in the economy.”

Rising cost of gas over time is Americans’ top concern

We need a return to lower prices

“The long line of cars speaks for itself. Hoosiers are desperate for a return to pre-Biden policies… Enough is enough!”

This morning the Phil’s One Stop in Huntertown sold gas for $2.38, which was the price when Biden took office. The long line of cars speaks for itself.

Hoosiers are desperate for a return to pre-Biden prices. Dems must end their war on energy. Enough is enough!@AFPhq pic.twitter.com/P2YGrvSS0o

Unleash energy abundance instead of attacking it

“The folks in Whitehall and the folks in Springfield have the same concerns. They’re wondering why the Biden administration just doesn’t approve the Keystone Pipeline so we can lower energy prices. They wonder why JB Pritzker and Democrats in Washington continue to attack American energy exploration.”

The #1 question: Why are gas prices so high?

“Thanks to AFP for putting this on and showing the country why we need to reduce our gas prices. It’s the number one issue I hear when I come back to Peoria: why are gas prices so high?”

The consequences of reckless government spending

“The results of the Biden administration’s policies have led gas from that $2.38 per gallon … to $4.89. That’s more than double, and that is being felt by West Michiganders. That’s being felt by everybody who has to commute to work…

This is what happens when you have excessive government spending that’s driving inflation and overt hostility to American energy production.”

Great to partner w @AFPhq today! Thanks to their work, a Wyoming gas station rolled back prices to $2.38/gal – the price at the pump when Biden took office. Current prices are a result of excessive govt spending driving inflation + hostility to American energy. We deserve better. pic.twitter.com/Kw5cvHmavg

The policies that could bring down rising gas prices

“What a blessing to my community. Let’s not forget it was just a year and a half ago that Joe Biden declared war on the energy of this country… Joe Biden is trying to blame everybody under the sun but it’s all about policy.

Use our own resources

“What we can do is listen to AFP…we understand that America is too great to diminish the abilities we have, the resources we can use, and the future that ought to be brighter than the last one.

When you have good policy based upon the resilience of America, based upon all of the resources we have that we’re wasting by leaving them in the ground…life could be good and sweet.”

We’re spending too much money.

“Number one, we’re spending far too much money. That’s inflationary and causes everything to go up.

Number two, we absolutely need to once again be energy independent. There’s no reason we need to be buying gasoline from Russia, the Middle East, Africa, etc. if we can do it right here in America.”

“The best thing that we can do is make Democrats approve permits for American energy exploration, approve the Keystone Pipeline, and ensure that we continue to help families who only care about getting prices back to that price [$2.38 a gallon].”

“Cut reckless spending that’s been driving inflation. Approve and support American domestic energy production. And focus on recognizing reality, not living heads in the clouds … but recognizing the impact that these negative policies are having on older folks.” 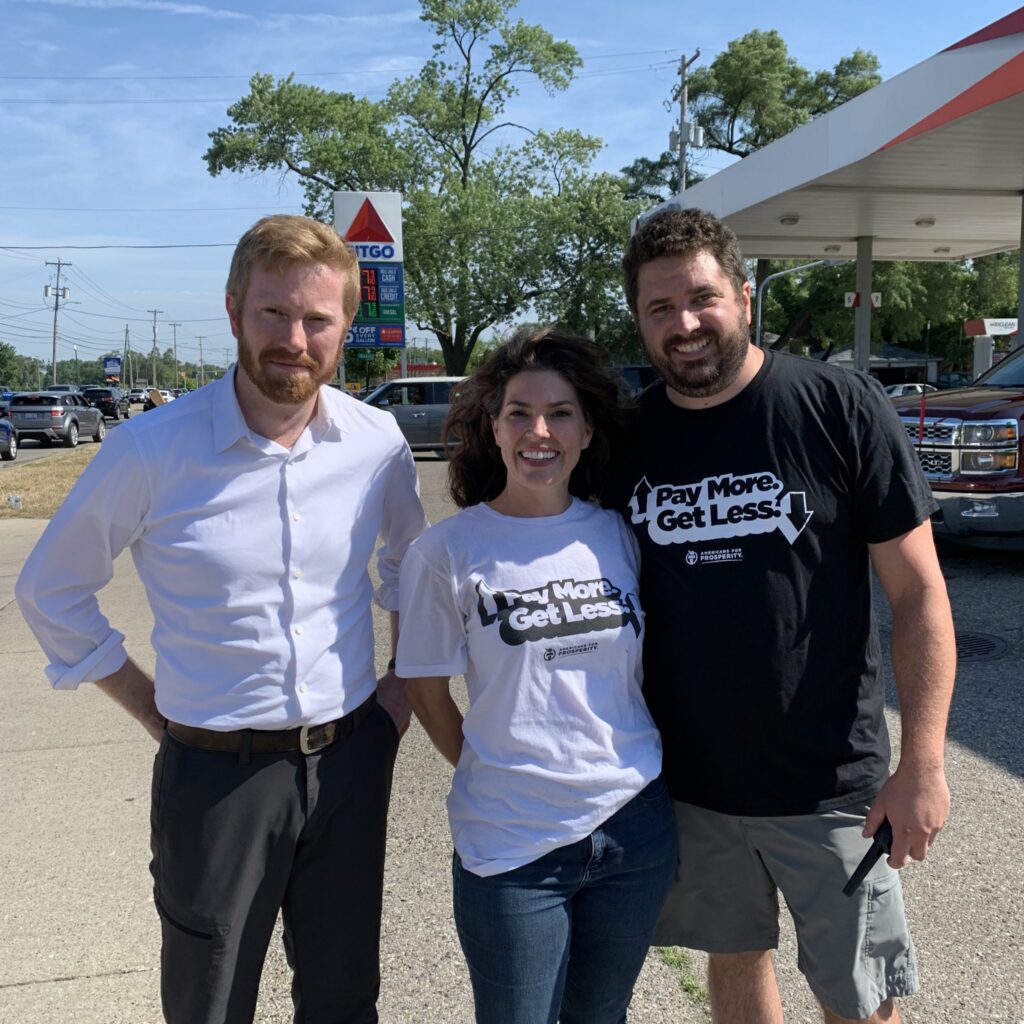 Grand Rapids, Michigan – June 30: Rep. Peter Meijer joined AFP-Michigan state director Annie Patnaude and AFP volunteers at their True Cost of Washington event. Rep. Meijer shared what he thinks is causing inflation to increase and what solutions we have on hand to lower gas prices.

“It doesn’t need to be this way. … We have 200 years of oil left in this country. We ought to be producing energy here in an independent way. … We have to get back to energy independence. … We ought to open up production in a safe, environmentally-productive way. We can do that, but we need good policy, and we haven’t had that with the Biden administration.”

Make sure life is not unaffordable

“So the first thing the Biden administration could do, is stop the war on American energy. Let us explore our energy resources. I’d much rather sell energy to our friends than buy it from to our enemies.

The second thing he can do is stop the runaway spending. He’s proposed increasing the EPA’s budget by 29%. The Department of Interior by 24%. They’ve spent trillions of dollars in deficit spending. Stop that and that would start helping inflation as well.

“The last thing we ought to be doing is raising taxes. It’ll make the economy even worse, it’ll kill people’s jobs, particularly small businesses who can’t afford this…small businesses are the backbone of the American economy. Don’t over-tax them, don’t over-regulate them, let them do what they do best.”

Yesterday we caught up w/ ⁦@RepSteveChabot⁩ on the #TrueCost tour to talk about the proposed TRILLION dollar tax hike in the new reconciliation plan.

It doesn’t have to be this way

“A big shout out for Americans for Prosperity. This is such an important event to point out what’s happening”

What we’re seeing is people lining up for hours, and they’re mad. They’re mad because they’re having to make decisions between gas and food…the sad thing is it doesn’t need to be this way. We’re off track with our energy policy

“I sit on the Energy and Commerce Committee. We could be doing more in this country to make sure this [rising cost of gas over time] doesn’t happen.

He [President Biden] killed the Keystone XL on his first day in office, 830,000 barrels. He’s killing leases on federal lands and offshore…

And then of course right here in Ohio, we’ve got Michigan with the governor up there wanting to kill Line 5, which is a huge amount of product that comes into Ohio every day.”

This is the true cost of Washington

“This administration, from the get go — well, even on the campaign trail — they talked about wanting to end fossil fuel production.

The first day in office, he shut down authorizations for pipelines and just took not only an incredibly hostile approach to American energy production and the abundance of energy we have domestically, but he also ushered in massive stimulus spending packages that have led to the inflation that’s driving up costs as well.

So there are many different factors behind it, but frankly right here this is the true cost of government.”

“The first thing he [President Joe Biden] did was cancel the Keystone Pipeline. And then he tried to cancel the leases on federal lands. And, in fact, he still after a year and half, has not had a successful lease on federal land for energy exploration.”

Learn more about the True Cost of Washington Tour to see how you can help lower the cost of living in America.