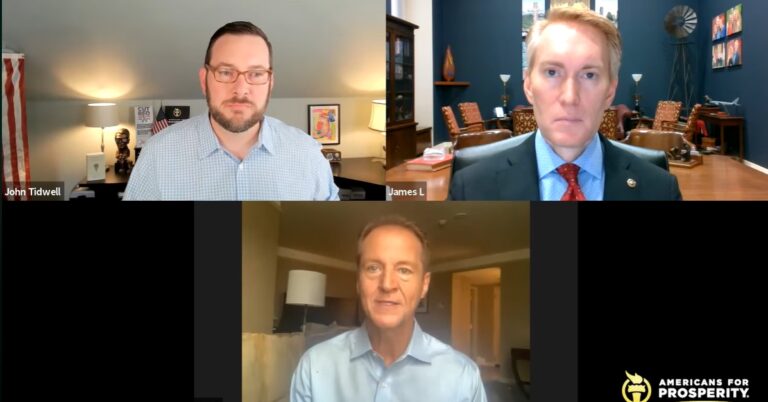 While the $1.2 trillion “infrastructure” bill the Senate passed August 10 has been labeled “bipartisan,” millions of Americans and their representatives in Congress oppose the wasteful spending contained in it.

Those voices include Sen. James Lankford (R-Okla.) who joined Americans for Prosperity  President Tim Phillips and AFP-Oklahoma State Director John Tidwell for a Facebook Live event just before the senator cast his vote opposing the legislation.

Lankford described the infrastructure bill as a “terrible idea” that will add to the nation’s debt, eventually tax Americans based on how much (and what type of car) they drive, and contribute to higher inflation.

The senator said individual consumers and families already are dealing with higher inflation because of Congress’ pandemic-related overspending.

“There is no question that what’s happening in inflation right now around the country, prices going up, is directly connected to that $2 trillion bill that was passed by Democrats on a straight party vote in March. The formula for inflation is not hard.”

He warned that price increases are not transitory and will not fall back to where they were, especially given that lawmakers’ spending spree might be just beginning.

After voting on the $1.2 trillion infrastructure bill, the Senate voted on a $3.5 trillion “infrastructure” budget resolution authored by Sen. Bernie Sanders (I-Vt.).

The budget resolution, which Lankford also voted against, would set the stage for the largest tax increase in the nation’s history. It also calls for dozens of policy changes, including enacting costly new energy regulations and a radical rewrite of employment and labor law.

“This is a massive amount of money,” Lankford said. “There has never been a year in American history that’s ever even been close to the amount of spending that they’re trying to do this year.”

In today’s dollars, the cost of President Franklin Roosevelt’s New Deal would be less than one-third the cost of Democrats’ budget resolution, he said.

Phillips encouraged individuals to continue to make their voices heard since the House and Senate still have a lot of work to do, and several votes to cast, before either piece of legislation reaches President Joe Biden’s desk.

Lankford also urged constituents to call their leaders in Washington. “If you’ll be one of those people who will engage, you’ll have an outsized influence,” the senator said. “Don’t hesitate to share your thoughts.”