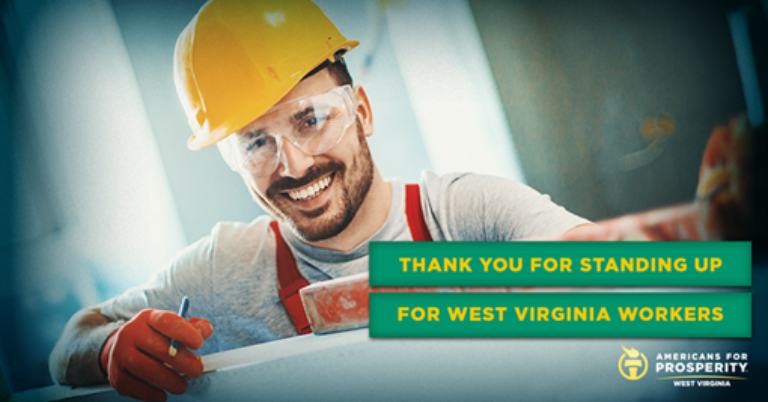 CHARLESTON, W.Va.—Americans for Prosperity-West Virginia (AFP-WV) this week delivered a letter to state lawmakers outlining the organization’s support for the vital paycheck protection bill, SB355, which will safeguard individual workers’ free speech rights. The organization also launched a digital ad buy thanking members of the State Senate who voted in favor of the bill, urging them to continue standing with working families across the state.

“Currently, some employers are able to deduct wages from a worker’s paycheck for use in political activities without first seeking that worker’s permission. This practice is absolutely unacceptable because it seriously undermines working West Virginians’ freedom of speech and takes money away from families who could otherwise use their hard-earned income how they best see fit,” AFP-WV State Director Jason Huffman says in the letter.

“People should never have to contribute to political causes they don’t support. This bill is a win for hardworking Mountaineers and our constitutional rights,” Huffman added.

The bill, if passed by the House of Delegates, will ensure that no employer can deduct wages from any employee for use in political activities without each worker’s express written permission. Under current law, some employers can take money from an individual’s paycheck to fund political advertisements without express permission from the worker.

The letter also states that this legislation will be included in AFP-WV’s annual legislative scorecard and accountability campaign. Opponents of this free speech protection, including teacher unions embattled over pay and benefits, are misrepresenting the bill’s intent, erroneously indicating that the bill actually harms workers’ free speech. Thankfully, the many West Virginians will see through this false narrative and the organization is urging lawmakers to do so as well.