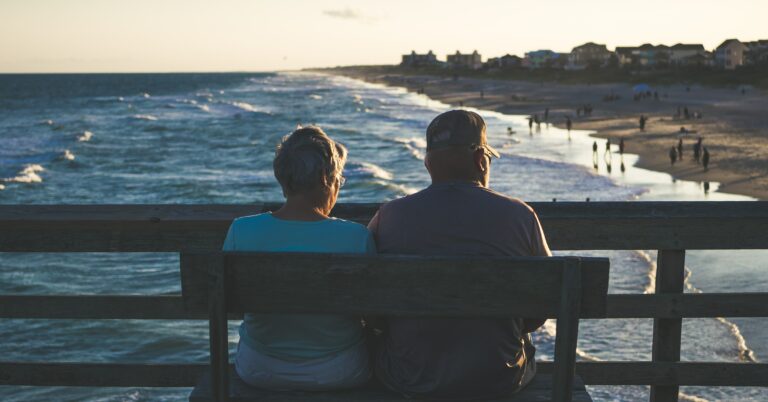 Social Security is in trouble

The trustees say the OASI trust fund will be exhausted in 2034. At that point, all beneficiaries will get a 23% cut to monthly benefits unless Congress acts. CBO’s Budget and Economic Outlook: 2022 to 2032 had similar estimates in May 2022.

When will Congress act to address how to make Social Security solvent?

The Government Accountability Office recently called on Congress to address financing gaps for Medicare and Social Security. Yet Congress continues to delay reform and shows little sign of breaking the stalemate.

Congress too often waits for a challenge to become a crisis before it acts. This procrastination harms both Social Security beneficiaries and the taxpayers who fund today’s benefits.

Automatic fiscal stabilizers would replace inaction with specific changes in statute to improve solvency and, if done well, prevent the trust funds from becoming depleted after multiple rounds of adjustments. They could also motivate Congress to act with better alternatives, but automatic enforcement must be reasonable to minimize Congress’ temptation just turn them off.

Automatic adjustments can be scaled to prevent trust fund depletion entirely or only to delay exhaustion while Congress considers better approaches than repeated, incremental changes can provide.

Under the 2042 Intermediate scenario (sheet IV_B, cells E38-E39), the OASI shortfall is projected to be about 3.50% of payroll. Automatic fiscal stabilizer policies in 2022 to reduce that shortfall by 10 percent would require reducing the shortfall by 0.35% of payroll in 2042, at least in this proposal.

Reducing the shortfall by the same amount over the entire 2022-2042 period would require larger changes, while doing so over the 75-year projection period (2023-2097) would require less change but probably not avoid trust fund depletion.

Table 1 shows how this can work.

Each line adapts existing estimates with a goal to reduce the shortfall by 0.35% of payroll in 2042. Understanding interactions and other technical issues would require close collaboration with the Social Security Actuary. Note also that the official estimates include Disability Insurance, while this article focuses on OASI alone. 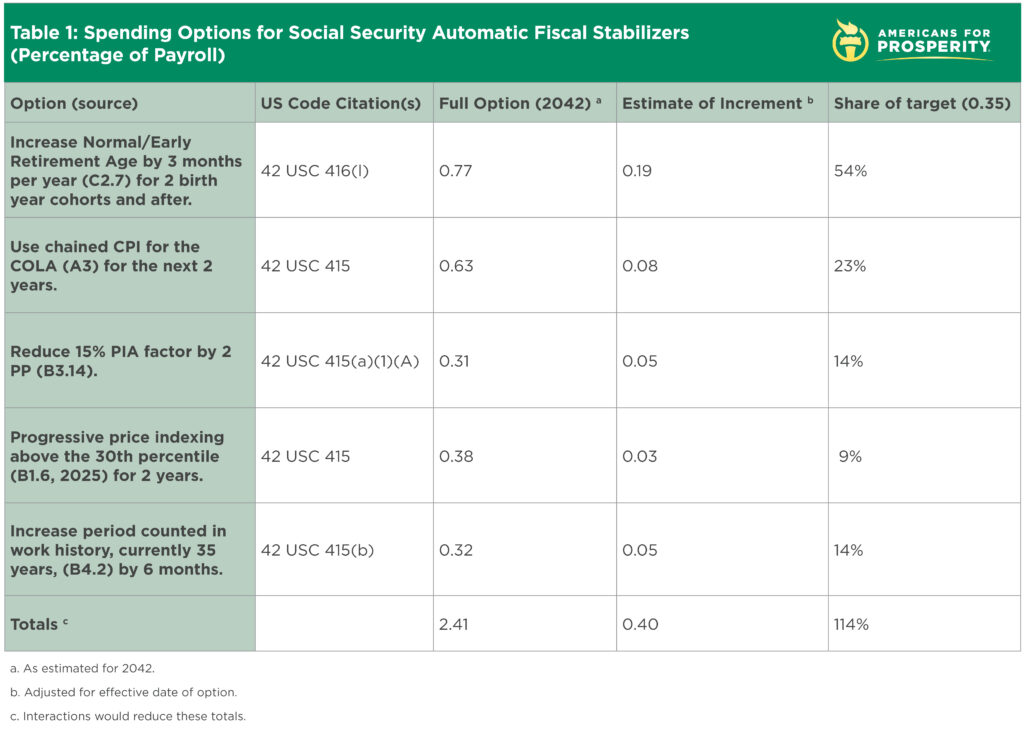 These five incremental, repeatable options would exceed the overall target by 14%.

Slightly increasing any of the first four options would mean that the fifth item would go unused during the first round, and the next round would begin with it before starting at the beginning of the list again. An option could be triggered more than once in a year to meet the savings target. This approach can clearly work.

Should revenue be included when considering automatic fiscal stabilizers as a solution for Social Security’s solvency gap?

Even so, raising revenue may be necessary to obtain and sustain congressional agreement on automatic fiscal stabilizers.

If adopted too close to a solvency crisis, the math may require even more aggressive spending and revenue changes to stave off trust fund exhaustion. Waiting until Social Security reaches a solvency crisis, however, means greater uncertainty, and it risks much worse outcomes than a palatable but less-than-ideal package.

How automatic fiscal stabilizers could include revenue:

Illustrative automatic adjustments from both spending and revenue changes:

Repeating this process should delay OASI trust fund exhaustion date indefinitely while gradually closing the financing gap. If these seven options were enacted in full, they would collectively exceed the 3.50% of payroll financing gap by a substantial margin.

The dynamic approach of automatic fiscal stabilizers, however, adjusts the required savings to match the financing gap. As savings narrow the next year’s shortfall in twenty years, fewer subsequent adjustments would be needed to keep the Social Security Old Age and Survivors Insurance program solvent.

Solvency is an important goal for Social Security but hardly the only one.

Setting the program on the course of fiscal stability through reasonable, incremental changes to existing parameters in statute, however, could empower Congress to find other ways to improve value for both taxpayers and beneficiaries.

It would also encourage Congress to find even better ways to secure solvency, as retired Senator Rudy Boschwitz from Minnesota recently described in the Wall Street Journal.

It would also help prevent a trust fund crisis and perhaps a broader fiscal crisis. Automatic fiscal stabilizers could provide more certainty for Social Security beneficiaries, taxpayers, and the legislators charged with overseeing the program.