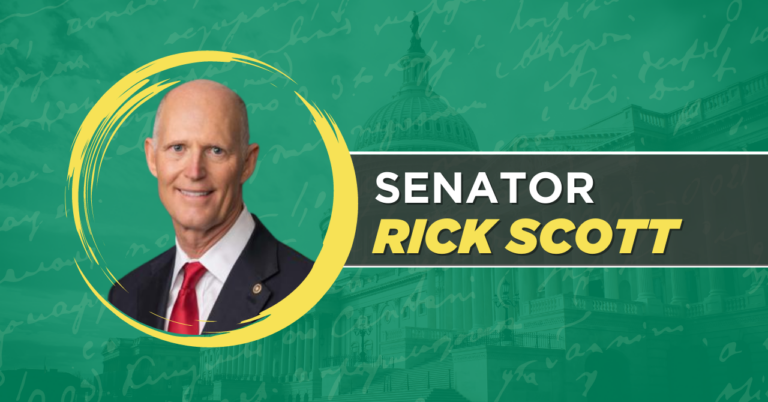 These are the issues Florida’s Senator Rick Scott is focused on for 2023 in order to get America back on the path to prosperity.

To explain why all three of these issues should be top of mind for every American, Senator Scott joined Americans for Prosperity Vice President, Akash Chougule, to discuss these topics in detail.

Washington needs to stop wasteful spending to return to prosperity

If government spending keeps rattling down the same path, “there’s a day of reckoning” in our near future, Senator Scott explained.

“Who is going to pay for all this?” he asked.

“Think about just since Reagan left office, the unbelievable increase year after year, president after president of just constant increase in the debt.”

As that day of reckoning approaches, Senator Scott firmly believes it is America’s most vulnerable that will pay the price.

And for Senator Scott, this reality hits close to home.

“I was born to a single mom. We lived in public housing. I watched her struggle to put food on the table. We’ve got more people in Florida going to food banks, I think, than ever gone to food banks. I’ve got people taking second jobs, delaying their retirement.”

However, Senator Scott also believes it’s not too late to change course.

Currently, the congressmen the American people elect have very little power to make budgetary changes to programs like Medicare and Social Security. He sees that as an area that needs immediate adjustment.

The budget isn’t the only government-driven debacle that’s causing America’s most vulnerable to teeter on the edge of financial disaster.

“When the Biden administration, the Democrats say, they have a war on fossil fuel– it’s actually a war on the poor families. Energy is a driver to the world economy. It’s a driver to getting people out of poverty.”

Senator Scott also explained that Americans can see the consequences of lacking energy independence by looking at what’s happening in Europe:

“Their economy is in shambles right now because Europe relied on Russia. Russia’s held back. Everything is tied to energy. Food production, manufacturing costs, everything.”

With D.C.’s current policies, the same situation could occur here. The demand for energy doesn’t go down just because D.C. bureaucrats refuse to let it be produced on American soil.

Senator Scott believes the best strategy to unleash energy independence and resolve a host of other issues faced by Americans today is to cut out burdensome and outdated regulations.

“There’s a lot of regulations that might have been a good idea years ago. But why do we need government dictating all of our lives? I really trust individuals. I trust Americans to make good choices.”

Unfortunately, not every politician in D.C. has this amount of faith in the American people.

By contrast, Senator Scott saw how taking the opposite approach— and slashing red tape— has huge benefits to the American people when he was governor of Florida.

This not only made opening a business easier, it brought new jobs to Florida too. Then-Governor Scott’s decision to slash 20% of regulations in the state and cut taxes and fees 100 times assisted in creating 1.7 million new jobs in Florida.

As a senator, Scott holds the same beliefs he held as governor: say what you mean and do what you say you will.

However, Senator Scott knows he can’t meet all his goals without Americans putting pressure on other Congressmen to do the same.

“You have got to tell your House member and your center that they have to put more effort into getting control of the budget,” he said.

Watch our interview with Florida Representative Kat Cammack for more ideas on how Congress can kickstart our economy.