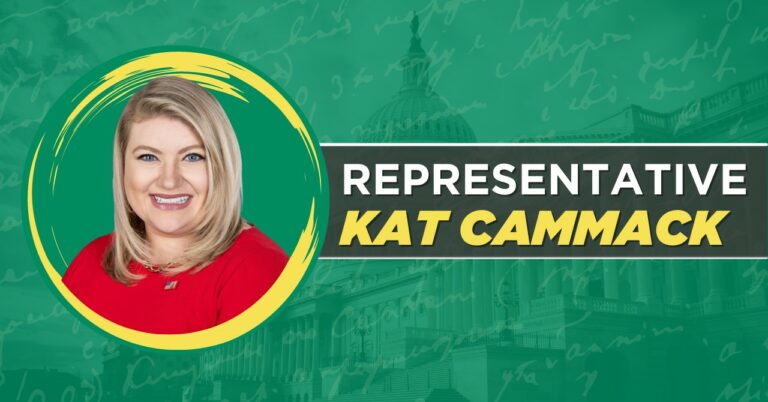 As a freshman legislator, Representative Kat Cammack of Florida has learned a lot. She’s seen big government reign and government spending spiral out of control.

However, she’s also gained insight into how America can get back on track by putting power back in the hands of the people.

Americans for Prosperity’s vice president for legal and judicial strategy, Casey Mattox, sat down with Representative Cammack for a Congressional Convo about what’s going on in D.C. currently and what she has planned for next session.

In her first two years as a representative in Congress, Cammack has become well acquainted with policies that won’t solve the issues of everyday Americans. As she explained:

However, instead of yelling from the rooftops about the dangers of spending, many of her colleagues in Congress have spent the last two years expanding the size and scope of government.

“We create all these programs that are designed really, in my opinion, to keep people dependent on government programs. And that in turn turns to the scope, which is the everyday involvement of government in our lives, from everything from a mandate to the regulatory environment.”

Spending our way into an economic tailspin

In order to expand the size and scope of government, the legislative and executive branches have spent the last two years spending trillions.

“There are absolutely consequences for $10 trillion that has been spent in the last 23 months under this administration,” Representative Cammack noted. “And we’re seeing the immediate impacts, which, of course, [is] historic inflation.”

This spending has not only caused inflation and an economic tailspin, but has also had far reaching consequences.

“We can talk very largely about the open border and crime that has gripped this nation. The lack of foreign policy that has come in the last few years,” she explained. “But the economics of it all really are the root of the source of both our success and our troubles.”

“What I have experienced as a freshman legislator for the last two years has been a very closed process that is rushed, hurried with little or no input from Republicans,” she said.

However, she didn’t let doors being slammed in her face stop her from planning for the future. Representative Cammack is looking forward to working with her fellow congressmen to pass the REINS Act this coming session.

“It’s designed to rein in government because what we’ve seen is that the executive branch takes a very aggressive approach to regulating industries to achieve political aims,” she said.

“That’s really not the function of the executive branch. So returning the regulatory capability to Congress for an up or down vote, because, quite frankly, you can fire your Congressmen, you can’t fire a bureaucrat. It’s virtually impossible. That is going to be a huge focus of mine.”

Working across the aisle

Representative Cammack sees a lot of opportunity for positive change in Congress. She would like to see legislators worry less about the D or R next to their name and think more about the American people as a whole and how to help the nation grow together.

“I grew up in a Democrat household,” she said.

“We all kind of want the same things, not everything, but I would say 80% of the things we want, we want to be able to buy a home and raise a family and have safe neighborhoods.”

While Representative Cammack will not waiver on her stance to cut down government spending or reign in big government— there is a lot she is willing to work across the aisle on.

“Dealing with the opioid epidemic is going to be one,” she said. “I think some of the defense issues that are coming up next year, some of the farm bill issues that will cut across both sides of the aisle, those are all areas where we have an opportunity to do good work without having to compromise who we are as both conservatives and liberals.”

Creating a Congress that works for the people

For Representative Cammack, working across the aisle is about doing what is best for the American people.

However, this isn’t the only change she wants to see to ensure Congress is truly working for the people it serves.

Representative Cammack is a huge proponent of single-issue bills and congressmen having adequate time to read bills before passing them:

“We have these massive packages that all these things that have no business being buried together. Something that’s also very frustrating is getting a bill 24 hours before you have to vote on it or less. And I know call me crazy: I actually read the bills. You’re expected to cast a vote on behalf of three quarters of a million people!”

Constituents are crucial to keeping focus on what’s important

With long hours reading bills filled with unrelated pork and expenditures, Representative Cammack is incredibly grateful to her constituents who keep her focused on what’s important.

“There’s 12,000 pieces of legislation that are introduced in the Congress. When someone shows up or sends me a text message and says, hey, there’s this bill coming up and I just want to flag this for you, you have no idea the importance of that,” she said.

She says the best thing people can do to end big government’s reign and end wasteful spending is to stay involved.

“No one is going to do a better job advocating for the things that you need and that you want than you,” she explained. “For the grassroots activists that are watching it right now, I would encourage you to stay involved with your member of Congress. That is so critically important.”

Watch our conversation with Representative Lloyd Smucker for more insight into how we can improve our economy and lower inflation.