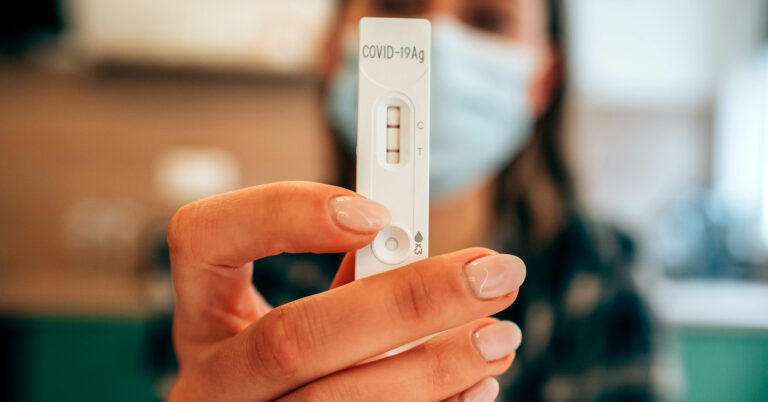 The president then tried to reassure Americans who have been standing in line for hours for tests and waiting days for results. Pointing to a federal website through which households can order four free tests, the president said, “[W]e’re doing more now.”

Those words were not enough to soothe anxious listeners. As The Associated Press reported, while medical experts, parents, and small business owners said it will be “nice” to have a few free tests, they doubt the initiative will do much to contain COVID-19’s spread.

Congress has appropriated nearly $83 billion for testing since the pandemic began. More should have been done.

More could be done. And a personal option for health care would solve the U.S. COVID testing shortage and ensure we don’t experience such shortages in the future.

Why is there a COVID testing shortage?

In a pandemic or epidemic, widespread access to accurate, fast diagnostic testing is essential to isolating and containing the contagion.

The United States is the world’s health care innovator. The country has thousands of private and public laboratories, both large and small, that are capable of creating and deploying effective diagnostic tests.

But instead of encouraging private sector innovation, in early 2020 the U.S. Food and Drug Administration (FDA) opted to put one entity, the U.S. Centers for Disease Control and Prevention (CDC), in charge of creating a single test for all Americans to use.

The FDA even rebuffed a request by Washington state researchers to use coronavirus tests they developed. (Readers will recall that COVID-19 hit the Pacific Northwest first.)

The FDA insisted tests could be done using only CDC kits. Instead of empowering America’s innovators, the FDA put all its eggs in the fragile government health care basket.

And it shattered. As we now know, the CDC gambit failed. The test kits were contaminated.

That failure put the United States behind other nations, such as South Korea and Taiwan, which allowed their labs to create the tests they needed to bring the virus under control.

A government option did not work, but a personal option that empowers innovators would

The U.S. response to COVID-19 has demonstrated that health care administered by the government fails Americans time and again. Bureaucrats botched COVID-19 testing at the beginning of the pandemic, and they never caught up.

It is time for reform.

Americans for Prosperity’s personal option would give every American choice and control over their health care and unleash the power of health care innovators to meet the needs of Americans.

An alternative to a public option where government officials make every decision, a personal option would improve affordability and quality and hasten innovation by:

These initiatives would take health care decisions out of the hands of politicians and put them in the hands of Americans and the clinicians they trust.

It all comes down to trust. Who do you trust with your health care? The government? Or your own doctor?

How a personal option can fix America’s COVID testing shortage

While federal policymakers have squandered billions of taxpayer dollars meant for testing, they at least sped up FDA approval processes for COVID vaccines and treatments through 2020’s Operation Warp Speed.

That’s one reason why, within a year of the pandemic hitting U.S. shores, Americans were lining up to receive one of three FDA-approved inoculations (although the FDA took several weeks longer to approve the initial Pfizer vaccine than regulators did in the U.K.).

If only the FDA had done the same thing for testing.

Instead of the current highly bottlenecked and bureaucratic system, the United States needs a more nimble, decentralized approach to oversight.

A personal option would deliver all these improvements. It would reduce approval timelines and spur the development of diagnostic tests and thus strengthen our ability to save lives. Americans would have more testing choices for this pandemic — and future ones.

Join the movement toward a personal option

The testing debacle is a government creation. At the beginning of the pandemic, the reliance on government-controlled health care innovation cost the United States five precious weeks, during which time the virus spread unchecked.

In the ensuing months, Congress approved billions in funding for COVID testing, and yet another $83 billion solely for tests in March of 2021.

So where are they? Where are the tests? Instead of being prepared, the country was caught flatfooted when the highly-transmissible omicron variant appeared.

There is no doubt the world will have to deal with other COVID variants in the future. By enacting a personal option now, lawmakers can begin to right earlier testing wrongs and ensure the country is ready for the next surge of this virus.