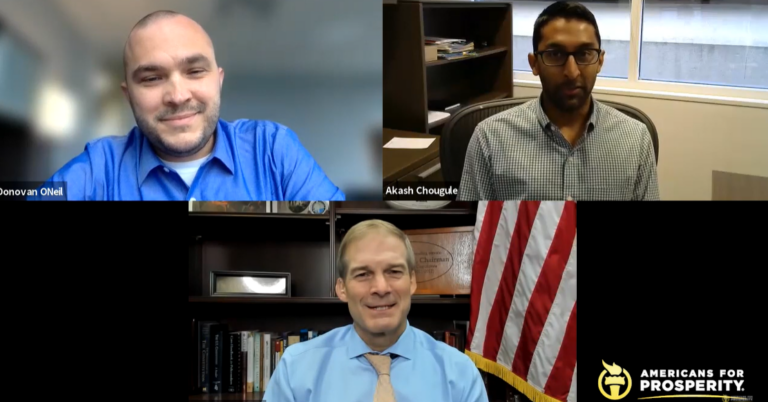 As the House of Representatives barrels toward votes on the Senate’s $1.2 trillion infrastructure bill and Democrats’ more than $3.5 trillion budget reconciliation, Rep. Jim Jordan took time to join Americans for Prosperity for a Facebook Live event, part of our Congress Convo series.

Jordan discussed a significant issue currently facing Congress: raising the debt ceiling, the congressionally mandated limit on the amount of national debt the country can take on.

Raising the debt ceiling is a temporary measure that ensures the country doesn’t default on its obligations, but that measure should only come with long-term solutions, such as spending reforms that require Washington to tighten its belt.

One solution Jordan proposed is a balanced budget amendment to the U.S. Constitution.

“Everyone has to balance their budget. Every family, every business, every township, city, county, state,” remarked Jordan, “except the federal government.”

The United States is now approaching a $30 trillion national debt.  Jordan explained that the amount of money it takes to service the debt alone is astronomical. Indeed, interest on the debt is about $525 billion annually. Spending on interest on the debt is more than the country spends on veterans and military retirees and more than three times what it spends on transportation.

If broken down into how much each household would owe on interest on the debt, that amount is more than the average household spends on gas, clothing, education, or groceries every year.

As Jordan says, that number is “getting bigger and bigger” each year.

Eventually servicing the debt will crowd out spending on other priorities and lead to tax increases.

An ‘unprecedented’ level of spending

On top of the crippling national debt, Congress is considering over $5 trillion in so-called “infrastructure” spending. The numbers are “unprecedented,” according to Jordan.

Jordan put the size of Congress’ current spending plans in context, reminding viewers that when President Barack Obama proposed his economic stimulus in 2009, he estimated it would cost $750 billion. At the time, that amount of spending seemed outrageous.

But the $4.7 trillion in spending that House lawmakers will vote on is nearly six times that amount.

And little of it will go to traditional infrastructure.

“So much of this is special tax credits for industries that are picked by the left as their favored industries,” said Jordan.

Meanwhile, average Americans will be forced to give more of their hard-earned money to the Internal Revenue Service.

Jordan noted that, according to Congress’ nonpartisan Joint Committee on Taxation, taxes will have to be raised on families earning as little as $30,000 a year to pay for this spending.

Concerned Americans are having an impact

Jordan said one reason Speaker Nancy Pelosi has had a hard time bringing Democrats together is because Americans understand the consequences of Washington’s overspending — and they are making their voices heard.

“They are getting so much pushback from the American people,” Jordan said.

The congressman said his colleagues need to continue to hear from families and small business owners until the minute they vote. That is the way to stop the spending spree.

As House still is looking toward voting on the $1.2 trillion infrastructure bill and the more than $3.5 trillion budget reconciliation. If you haven’t voiced your opposition to Washington’s wasteful spending, write your lawmakers now.