BURNSVILLE, MN – Americans for Prosperity today released an updated state-by-state analysis of the real-life consequences of a new, federal 25-cent per gallon tax hike proposal. The release is part of a six-figure campaign across the country advocating solutions for improving America’s infrastructure without imposing new burdens on consumers through tax increases. 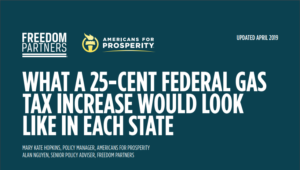 “There is a better road forward to improving our infrastructure rather than forcing Minnesotans to pay on-average nearly $300 more at the pump every year. A federal gas tax hike along with Governor Walz’s own 20-cent gas tax hike would force families to pay $0.45 more at the gallon. That’s simply unaffordable. This regressive tax would hurt low and fixed-income families the most, and drive up the cost not only of gas, but nearly every item on store shelves that families depend on. Lawmakers should instead focus on solutions that prioritize roads and bridges, eliminate wasteful spending, and remove regulatory barriers that will help resolve our core infrastructure issues.”

In addition to the re-release of the state-by-state report, AFP will begin launching digital ads encouraging Rep. Pete Stauber, who sits on the House Transportation and Infrastructure Highway Subcommittee, to oppose any efforts to increase the gas tax and instead prioritize key reforms that will improve our nation’s infrastructure, such as:

AFP-MN has been at the forefront of urging state lawmakers to protect Minnesotans from higher gas taxes. Earlier this year, AFP-MN ran a digital campaign urging lawmakers to oppose Governor Walz’s proposal to raise the gas tax by 20 cents.