ST. PAUL, MN – Americans for Prosperity-Minnesota announced today it is re-fueling its gas tax campaign and expanding its reach to let more Minnesotans know about the harmful consequences Governor Walz’s $1 billion gas and transportation taxes would have on Minnesota. The digital campaign includes a digital tool that connects Minnesotans to their lawmaker and allows them to voice their opposition to raise the gas tax.

Last month, Americans for Prosperity launched a statewide digital ad campaign that highlights the need to roll back Minnesota’s excessive taxes and encourages Minnesotans to contact their legislators to vote no on any gas tax hike. 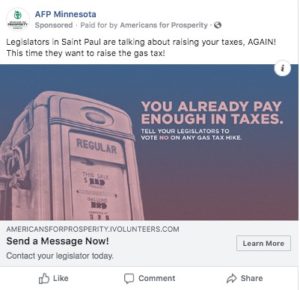 “Minnesotans who are struggling to make ends meet can’t afford Governor Walz’s tax hikes to pay for his excessive spending. The $1 billion in new gas and transportation taxes will disproportionally hurt lower income Minnesotans, forcing them to pay more at the pump. Raising the gas tax is an ineffective way of addressing our state’s transportation needs and does nothing to resolve the underlying issues cemented in our state’s infrastructure process.

“Governor Walz should protect Minnesota workers and taxpayers and enable them to spend more at the grocery store or save for the future rather than digging deeper into our pockets when filling up our vehicles. We are doubling down on our effort and encouraging Minnesotans to make their voice heard that our legislators should not ask Minnesotans for more of their money.”

In his budget address on Tuesday, Governor Walz called for a 20-cent per gallon increase in the state’s gas tax, a roughly 70% increase, which would vault Minnesota’s gas taxes to fourth-highest in the nation, according to the non-partisan Tax Foundation. Even worse, the gas tax would be set to increase with inflation, automatically taking more money from taxpayers every year.

In addition to the gas tax, Governor Walz also called for higher tab fees, increases to the motor vehicle sales tax, and the addition of a 1/8 cent metro-wide sales tax dedicated to transit.