Take Taxpayers Out of the Ballgame

Tallahassee, FL – Americans for Prosperity-Florida (AFP-FL) the state’s leading grassroots organization against corporate welfare handouts to professional sports teams has launched a digital ad in Tampa Bay aimed at educating citizens about corporate welfare for sports stadiums. The 30-second ad shows other recent examples, including the billion-dollar boondoggle in Miami-Dade, that have cost taxpayers in Florida and across the country billions of dollars.

AFP-FL believes that it is not the role of government to hand out tax dollars to fund the bottom line of professional sports teams and that the best solution to funding a new stadium is for private capital to be invested over taxpayers being asked to sacrifice over real community needs. 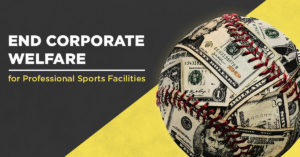 “Whether it’s in St. Pete or Tampa, it’s not the role of government to force hardworking taxpayers to subsidize professional team owners,” said AFP-FL State Director Chris Hudson. “If there is truly a market demand for a pro-baseball team in Tampa or St. Pete, teams should be able to attract private capital. But taxpayers should not be on the hook, whether through direct handouts or through sneaky slush funds propped up by tax or fee hike schemes. We hope local officials will focus on real infrastructure and community needs over the siren calls of failed sports stadium boondoggles.”