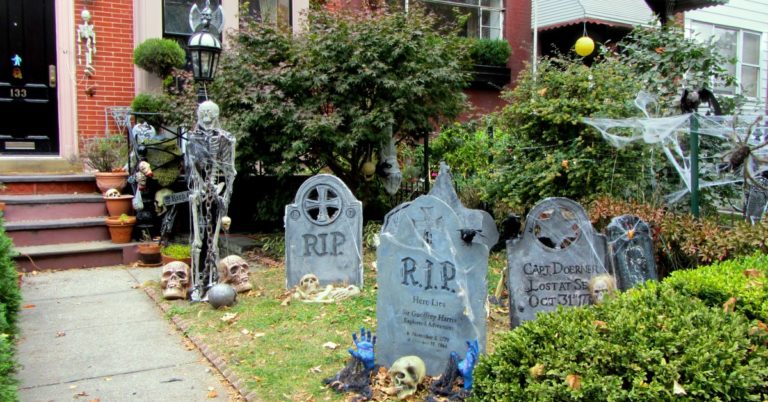 Take a Tour of the Bad State-Policy Graveyard

All year long, Americans for Prosperity activists work hard to kill pieces of legislation that erect barriers to opportunity across the country. This Halloween, the Bad State-Policy Graveyard is open for tours — and you’re invited!

Take a look at some of the scariest state policies that ended up here and find out how activists laid them to rest.

At the beginning of May, Tennessee voters overwhelmingly voted down a transit plan that would have been a waste of taxpayer dollars. The ballot initiative would have built a light rail system throughout Nashville, costing $9 billion (a fact lawmakers tried to hide from voters) and shutting down lanes of traffic for years during and after construction.

The ballot initiative died by a vote of more than 78,000 against and fewer than 44,000 for. AFP activists partnered with the Stop the Train Committee to spread the word about the terrible plan and knocked on 6,000 doors and made more than 40,000 phone calls.

Granite Staters face some of the highest electric rates in the country. Through meetings and other advocacy tools, AFP-NH activists were able to bring attention to the issue, showing how necessary it is to keep electricity rates from increasing.

At the end of July, American Electric Power canceled its Wind Catcher project, pulling the plug on an extensive corporate welfare scheme. Wind Catcher would have been the largest-ever wind farm in the United States, located in the Oklahoma panhandle.

Luckily, the $4.5 billion project died before Public Service Company of Oklahoma, an American Electric Power subsidiary, offloaded $1.36 billion onto Oklahomans through rate hikes to cover some of the project’s cost.

More than 740 AFP-OK activists made more than 2,800 calls to residents and sent nearly 3,000 emails to the Oklahoma Corporation Commission, urging members to reject the subsidy.

In July, New Hampshire Gov. Chris Sununu signed a bipartisan criminal justice bill that reformed the state’s bail system by requiring judges to consider an individual’s income and ability to pay when setting bail for low-level offenses and enabling people who are acquitted to petition to have an arrest expunged from their records.

This bill killed some unfair bail and annulment rules. Low-income defendants trapped in jail because they are unable to post bail are more likely to plead guilty and more likely to receive harsher sentences. The reform will also reduce the number of people in jail, saving taxpayers money.

AFP-NH activists were vocal in support of bail reform and worked closely with the legislature to ensure this bill made it to the governor’s desk.

In lieu of statewide legislative action, counties in New Mexico, one by one, are killing infringements on worker freedom.

All workers should be free to choose whether union representation is worth part of their paychecks. Yet in New Mexico, too many are forced to pay union dues as a condition of employment. To fight for worker freedom, AFP-NM first rallied in Sandoval County, which passed right-to-work legislation in January.