MANCHESTER, NH – Americans for Prosperity-New Hampshire (AFP-NH) today announced the launch of a digital advertisement campaign thanking Senator Hassan for sponsoring bipartisan legislation that would give Congress a vote on certain tariffs proposed by a president before they can take effect. AFP has endorsed S. 287, the Bicameral Congressional Trade Authority Act, and launched online ads to both thank eight original bill sponsors and to encourage specific senators and representatives to cosponsor the legislation. 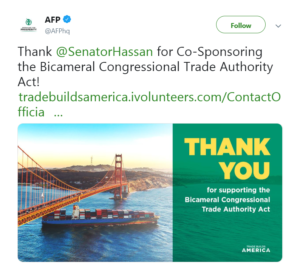 “Imposing barriers to economic growth and taxing American consumers and businesses in the form of tariffs threaten to undo the economic growth we’ve experienced the past two years. New Hampshire job creators, consumers, and workers have been harmed by counter-productive tariffs that Congress has had no say in. Congress should have a vote on tariffs proposed by a president before they take effect. We thank Senator Hassan and urge her to continue working to remove trade barriers and protect Granite Staters from these unnecessary taxes.”

Greg Moore recently published an op-ed on how tariffs are impacting the Granite State. You can read it here.