ARLINGTON, VA – Americans for Prosperity (AFP) today announced the launch of a new, digital advertisement campaign urging U.S. Senator Maria Cantwell and U.S. Representative Susan DelBene to support S. 287, the Bicameral Congressional Trade Authority Act (S. 287 / H.R. 940), which would give Congress a vote on certain tariffs proposed by a president before they can take effect. AFP has endorsed the bill and launched online ads to both thank eight original bill sponsors and to encourage specific senators and representatives to cosponsor the legislation. 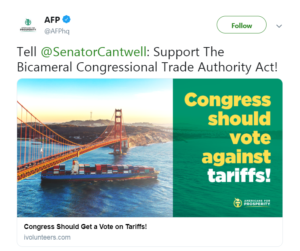 “Tariffs are destructive taxes on Washington residents, consumers, and businesses that needlessly hamstring our full economic potential. History shows tariffs do not work, and Senator Cantwell and Representative DelBene have an opportunity to protect their constituents by opposing these barriers to opportunity. AFP urges Senator Cantwell and Representative DelBene to take action and support the Bicameral Congressional Trade Authority Act that will ensure Congress has greater say over tariffs.”