It’s their goal to ensure that President Biden and the PA Federal Delegation hear the concerned voices of Pennsylvanians asking him to scrap the bill altogether out of fear that it will weaken the economy and lead to tax hikes on the middle class. The group will have a table with iPads, asking PA-08 constituents to sign a letter to Rep. Cartwright that encourages his “NO” vote for the infrastructure bill.

WHO: Americans for Prosperity Activists

Our grassroots activists can be easily identified wearing white t-shirts with the AFP logo holding yellow signs. Another landmark for AFP staff is that they will be nearby two gray wrapped Jeep Grand Cherokee with the “End Washington Waste” logo (below). 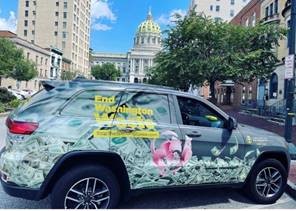