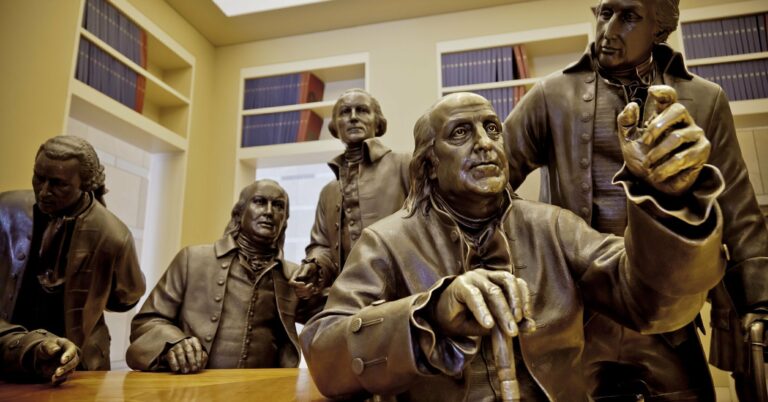 In the award-winning musical Hamilton, the eponymous character tells another character that the U.S. Constitution “needs a strong defense.” Hamilton may have been written a decade ago (and the Constitution more than 200 years ago), but the line, unfortunately, still holds up.

These days, the Constitution doesn’t seem like it’d win any popularity contests.

In a survey conducted by Echelon Insights after the Supreme Court Dobbs decision, voters under 50 are more than twice as likely as voters over 50 to say that the U.S. Constitution is not a relevant document today.

Trust in the presidency, Congress, and the Supreme Court — all institutions whose powers and responsibilities are established by the Constitution — has fallen, and calls to eliminate the Senate and pack the Court are increasing — ironically from members of Congress, the branch whose own public support makes the Supreme Court look like Dolly Parton.

Some suggest that the Constitution — written by white men who lived and died centuries ago — is entirely outdated and should be replaced with something new and better.

Yes, the Constitution is old — so old, in fact, that it is the world’s longest surviving written charter of government. It provides a legal framework that still works today — and would work better still if our political branches would follow it more zealously (Real constitutionalism has never been tried).

It has provided the United States with stability unheard of throughout human history of government, even as it provides a path for its own change — 27 times so far. And those Amendments ensure that its promises are — or should be — true for every American.

At its core, the Constitution’s aim is to empower people to make decisions about their own lives, as opposed to having their lives in the grip of a king. From its onset, it established “a government of the people, by the people, and for the people” — it put “we the people” in charge. And, in doing so, it limits government power — over everyone. It protects the natural and individual rights — of everyone.

It is virtually guaranteed that any replacement for our Constitution would empower the few in power over the many. That’s simply the state of the world and mankind. Abuse of power by the majority is a constant theme throughout human history — which our Constitution recognizes, and so it endeavors to constrain majoritarian power.

To paraphrase Winston Churchill, our Constitution is the worst form of government… except for all the others that have ever been tried.

The ideals of the Constitution are what guide us

Now, there is no denying that it was written by flawed men. But it was the ideals espoused by these flawed men in the Constitution that guide every generation of Americans to work toward “a more perfect Union.”

“The elites of the American Revolution crafted the words that gave the Revolution a meaning that was, in principle, universal — even to their own later detriment… Jefferson’s pretended virtue became the standard of moral aspiration for the nation and thus the basis for later generations to condemn Jefferson for his shortcomings.”

These flawed men may not have lived up their own lofty ideals. But they laid the foundation that led Americans to eliminate slavery, to expand the vote for women, to protest on behalf of civil rights. They provided within the Constitution a path for Americans to follow to advance the rights and ideals they believe in. And for the steps on that path to be of their own choosing, not forced on them by a king.

These days, voices on both the left and right tell Americans that they have no agency and no ability to effect change. That conspiracies and oligarchies, not grassroots voices and votes, are how things really happen.

Anyone who has spent any time in Washington, D.C. should be immune to the idea that there is anyone here controlling and executing a grand plan. But these claims have a cost, they lead to people feeling hopeless and to a lack of trust in our Constitution and our democratic process.

Free speech has always been the engine to effect change and for people to make their voices heard. And the Constitution guarantees that Americans still have that power. We see it across the country.

What we have is worth saving. What the founding fathers left us still works. It is the Constitution at work when Congress and the executive branch overstep their authority — losing public confidence in the process — and the Supreme Court exercises its responsibility to hold them accountable.

As George Washington said, the power of the Constitution will always be with the people. For Americans who are concerned about division and looking for ways to heal the deep fractures in our country, a government focused on adhering to the Constitution, even if any individual act of adherence is unpopular, is a necessary part of that.

The Constitution makes our country a symbol

In a recent naturalization ceremony, where 2,100 people became our country’s newest citizens, Los Angeles co-owner and second generation American Alan Smolinisky gave a speech on the promise of America.

“Now I know what you’re thinking. America isn’t perfect. In fact, it never has been. But we’ve always moved toward a more perfect union. Even now, we’re called to make America freer, fairer and better for all… No matter what you do, no matter how bad things look, never ever bet against America. It’s always a losing bet.”

Our Constitution has propelled the United States to be a shining city on a hill. Because of our Constitution, America is more than a country, it is a symbol. So much that one of the most divisive issues among Americans is how to handle the millions of people from around the world who would risk everything to make it onto our shores.

This Constitution Day, remember the words of Calvin Coolidge, who said that “to live under the American Constitution is the greatest political privilege that was ever accorded to the human race.” Let’s celebrate accordingly.

Casey Mattox is a First Amendment attorney and vice president for legal and judicial strategy at Americans For Prosperity.