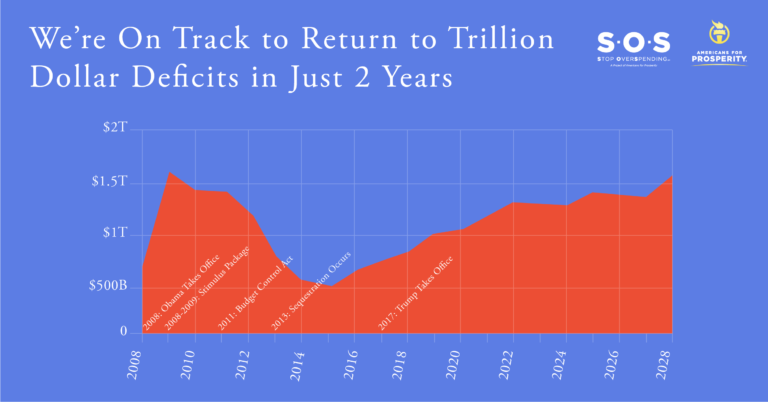 Are You Ready for Deficits to Crack a Trillion Dollars Again?

Many in Congress claim they are spending hawks and are sounding the alarm about our massive spending, debt, and deficits, yet they continue voting for reckless, record spending bills.

Just this past March, Congress overwhelmingly voted in favor of a massive “omnibus” spending bill – a mishmash of all the spending bills Congress is meant to debate separately. It was a record $1.3 trillion dollars and set the country on the path to spend over $4 trillion total for the first time this year.

Even worse, the escalating spending is putting us on a ruinous path of steeper and steeper increases and bigger and bigger deficits.

Over the past 10 years since the so-called economic stimulus package worked its way through Congress in 2008 and 2009, overall deficits have seesawed. They initially exploded, topping out at $1.55 TRILLION in 2009 – that’s the deficit for a single year. They then slowly began retreating again, getting down to a relatively “modest” $465 billion in 2015. Then, before President Obama left office, they started heading skyward again.

This year, the deficit is estimated to be $804 billion. And if we stay on our current trajectory, in just two more years, the deficit will top $1 trillion again. Even worse, in the next decade, deficit would get all the way back up to the $1.5 trillion where we were at the height of the economic crisis.

This Fall, as we look to 2019, Congress needs to send President Trump spending bills he can sign – not bills that keep spending and deficits on the same upward trajectory.

That’s why Americans for Prosperity is advocating for Congress to FREEZE federal discretionary spending at 2018 levels. That’s just a small portion of the overspending problem, but it would be a down payment on fixing the lager spending issues.

To find out more on our efforts, head to www.StopOverspending.com.