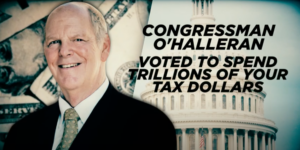 A sample of the ad is available here.

“Arizonans are worried about inflation and being able to pay their bills. The last thing Congress should be doing is spending trillions on far-left wish-lists like Build Back Better that will only exacerbate problems with inflation, labor force, and supply chain. We’re asking voters to send that message loudly and clearly to their elected representatives.”