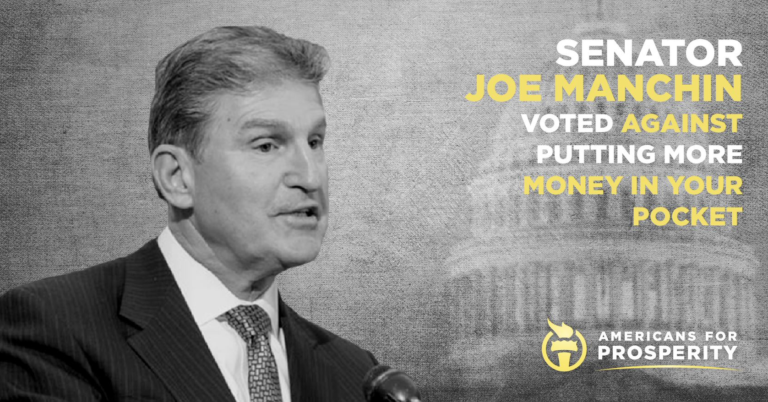 CHARLESTON, W.Va.—As part of a six-figure nationwide ad buy, Americans for Prosperity-West Virginia (AFP-WV) activists are being urged to write Sen. Manchin to express their disappointment with his “no” vote on federal tax reform efforts and encourage him to do the right thing for West Virginians going forward. Americans for Prosperity launched the grassroots campaign, “American Pay Raise,” on Friday to thank lawmakers who supported the Tax Cuts and Jobs Act, hold accountable those who opposed it and urge Congress to protect tax reform benefits that millions of Americans are already experiencing.

“People know that tax reform has been good for the economy and their personal bottom lines. They know the results are not the ‘crumbs’ DC insiders like Pelosi and Schumer think they are,” said AFP-WV State Director Jason Huffman. “They also know that Sen Manchin chose to stand with his party’s leaders instead of West Virginians, and we want to make sure he knows that. We will hold him accountable, and we urge him to shift his allegiance from his DC party bosses to his real bosses – the people of West Virginia.”

The West Virginia ad, which will begin running the week of March 19 and will run through Tax Day, April 17, will provide activists an opportunity to send an email to Sen. Manchin encouraging him to “Please protect tax reform’s benefits for hardworking Americans and support policies that increase economic opportunity.”

The ad can also be viewed here. More on the entirety of the campaign can be found here.