JEFFERSON CITY, Mo. – Following the House passage of H.R. 3, the Spending Cuts to Expired and Unnecessary Programs Act, Americans for Prosperity-Missouri (AFP-MO) will start running digital ads urging Sen. Blunt and Sen. McCaskill to approve the bill that would save taxpayers about $15 billion in unspent funds from previous years.

Contrary to her voting history, Sen. McCaskill has been an outspoken critic of the rising national debt, which now exceeds $21 trillion. During a 2014 stop in Kansas City, Sen. McCaskill called the then-$17 trillion debt “irresponsible,” saying, “We have to be careful about making the federal government the answer to everything, because it’s going to put us in a position where we’re not a first-tier nation anymore if we get swallowed up by the debt.”

In 2012, Sen. McCaskill sponsored the Reduce Unnecessary Spending Act, which would give the president 45 days to review budgets and make rescissions that would require the approval of the Congress.

In 2010, Sen. McCaskill, along with Sens. Jeff Sessions (R-AL) and Jon Kyl (R-AZ) introduced a constitutional amendment that would have limited federal spending. In a release she stated, “If there’s one thing that the American people can agree on, it’s the need to deal with our currently out-of-control deficits, and the need to deal with it now.”

“It’s long past time that Washington started to do something about overspending that threatens our economy. The rescission bill put forward by the President and approved by the House is a very modest, but necessary first step towards finally getting spending under control.

“Sen. McCaskill has been outspoken in the past about addressing our ballooning national debt – it’s time to put her money where her mouth is and put Missourians before party politics. We also hope Sen. Blunt will support this common-sense rescission package and help get this bill to the President’s desk. Missourians are counting on their Senators to do the right thing and if they won’t vote for a bill this modest, how can we ever expect them to take the really hard steps that will be necessary to tackle our $12 trillion debt?” 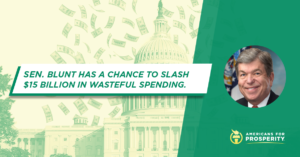 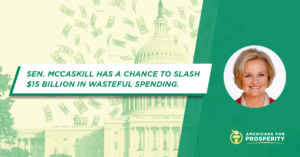