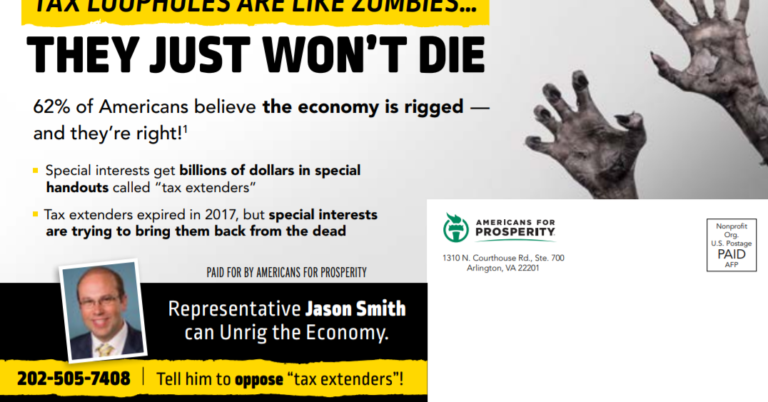 JEFFERSON CITY, Mo.—Americans for Prosperity-Missouri (AFP-MO) today highlighted its role as part of a national campaign through digital ads and mail urging Representative Jason Smith to “unrig the economy” and level the playing field for all Missourians.

According to a recent Washington Post/ABC News poll, 62% of Americans say the U.S. economic system mainly benefits those in power. The ads and mail are a part of a comprehensive, integrated nationwide campaign to urge lawmakers to create a strong economy by leveling the playing field for all. Called “Unrig the Economy,” this multi-year, multi-million-dollar effort will harness the power of AFP’s grassroots activists and partners to drive change at both the state and federal level.

The initial phase in Missouri will kick off with a robust direct mail and digital effort asking Rep. Smith to stop the renewal of “tax extenders.” Both policies perpetuate an economy that caters to special interests, leaving taxpayers to foot the bill.

“Legislators must end of the practice of renewing special interests every year called ‘tax extenders.’ They are nothing more than special interest handouts funded by hard-working Missourians. It’s wrong and it needs to stop. Rep. Smith can send the right message by opposing these giveaways to the well-connected when its up for a vote.”