NASHVILLE, TN – Americans for Prosperity-Tennessee (AFP-TN) today announced digital and grassroots efforts in support of Neomi Rao’s nomination to the U.S. Court of Appeals for the D.C. Circuit. This is one of the group’s largest grassroots efforts to date supporting a judicial nominee, and the largest effort for a lower court nominee. 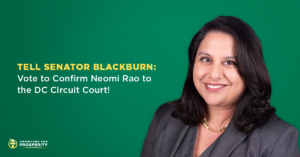 “Neomi Rao will serve as an excellent judge who is committed to the rule of law and interpreting the Constitution as written. Senator Blackburn has a great opportunity to demonstrate her leadership by supporting this qualified nominee’s confirmation to the most significant judicial appointment outside of the Supreme Court. We are engaging and mobilizing our activists to urge Senator Blackburn to confirm this principled jurist.”

Neomi Rao is the Administrator of the Office of Information and Regulatory Affairs. She has previously clerked for Supreme Court Justice Clarence Thomas and Judge J. Harvie Wilkinson of the Fourth Court of Appeals.

Earlier this year, Senator Blackburn was assigned to the Judiciary Committee.

Learn About These Judicial Nominees to Our Federal Courts