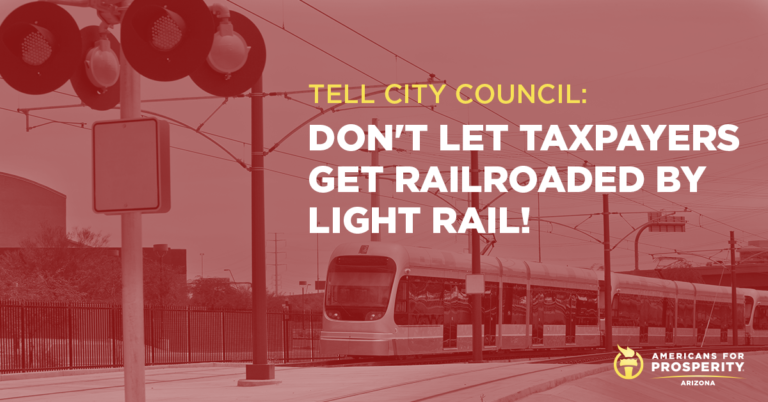 Phoenix, AZ – Americans for Prosperity-Arizona is launching a new education campaign in Chandler to inform residents and lawmakers about a massive $65 million boondoggle that could hit taxpayer pocketbooks if the City were to pass an expansion of light rail.

“Light rail ultimately produces low ridership, does nothing to address traffic congestion, and will cost taxpayers dearly year in and year out.  If the Chandler City Council insists on increasing transit spending, it would be far better off with bus rapid transit than with rail.  We hope the Chandler City Council will act responsibly and reject all proposals to expand light rail — a transportation boondoggle that would only fatten the pockets of special interests at the expense of local taxpayers.”

According to a new study by economist John Semmens of the Arizona Transportation Institute, Chandler residents would bear the brunt of a massive tax hike costing $65 million per year.  The high price tag is due to the fact that five-sixths of the high costs of rail are paid for by taxpayers, rather than by riders.  The study also points to low ridership and shows how sacrificing road lanes for light rail would ultimately reduce road capacity for Chandler drivers.