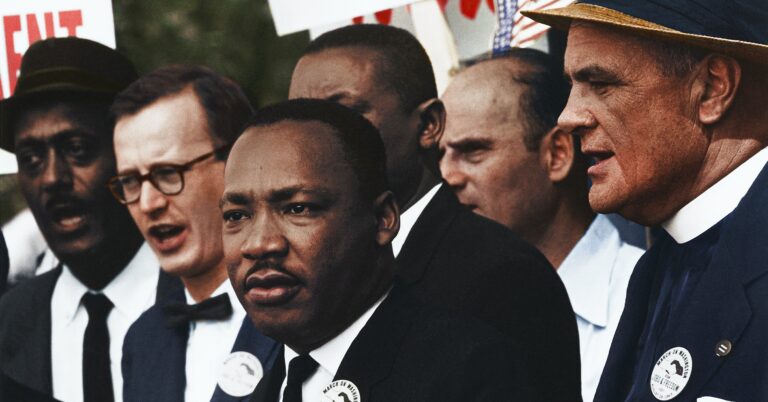 There’s so much to celebrate about Dr. King. He was perhaps the most significant non-president in American history. His courage changed America and advanced the cause of justice, equality, and freedom for every American. But because of the means through which he brought about that change — peaceful protest and his gift for rhetorical advocacy — MLK Day might also be the closest thing we have to a day set aside to celebrate free speech and the power of the human voice, exemplified in the life of Dr. Martin Luther King, Jr.

America was born from free speech and protest. The founders first used the pen to make their case long before they took up arms at Bunker Hill. And the First Amendment they created has been used throughout our history to advocate for social and political change. For movements both big and small — from Dr. King and the civil rights movement, to marches for women’s suffrage, to calls for an end to Prohibition — free speech and assembly were the engine that made change possible.

Dr. King is, rightly, the embodiment of our nation’s commitment to free speech. The images of him at Selma or standing on the steps of the Lincoln Memorial immediately come to mind when one thinks about “freedom of speech.” For Dr. King, violence was not speech. He became the symbol of non-violent protest and condemned political violence. He believed in human dignity and knew that every human has value, and he knew we are capable of extraordinary things together.

And that spirit of free speech and the freedom to assemble together to advocate a cause has not dimmed in America. It is fashionable now to insist that all the real political debate occurs online — that Twitter is the new town square. But while we all have many more ways to advocate for causes today from the comfort of our homes, millions of Americans continue to take to the streets every year — just as MLK and the civil rights protestors of the 50s and 60s did — to demand justice and seek change. From Black Lives Matter to the March for Life, Americans still use their First Amendment freedoms.

Get Freedom Forum’s toolkit on using your First Amendment freedoms!

I’ll leave you with Dr. King’s “Letter from Birmingham Jail,” which is a truly impressive piece of writing that’s always worth reading. Trinity Forum Senior Fellow and Atlantic writer Peter Wehner says it “ranks among the greatest religious epistles since the first century A.D” and calls it “a classic of prison literature, of protest literature, and of civil disobedience.”

There’s no better way to celebrate the life of Dr. Martin Luther King, Jr., than by using your voice to seek justice. “Our lives begin to end the day we become silent about things that matter.”

Civil liberties are the solution to uncivil times. Join the defense of Free Speech and subscribe to Casey’s newsletter today: