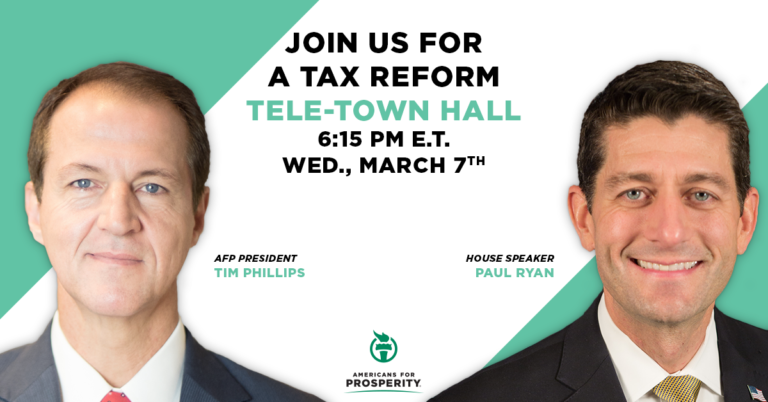 Tim Phillips began the call by thanking AFP activists for their phenomenal efforts in advancing the passage of principled tax reform.

The jobless rate last week hit the lowest level we’ve seen in 49 years….90 percent of all wage earners in America will see bigger wages as a result of the tax cuts.

The tax cuts people are seeing now, which in many cases amounts to hundreds of dollars, $2,000 on average per family, is a result of the income tax rate cut. People will see a doubling of the standard deduction…come Tax Day. That will be enormous.

This April 15 is 2017 taxes. But in 2018 you’re going to see not just bigger paychecks because of the rate cuts and the withholding changes, but bigger savings next year when you do your taxes.

The Speaker then elaborated on the corporate rate cut and what will mean for making businesses more competitive in the global economy:

This [corporate rate cut] brings our tax rates for businesses down to the lowest level they’ve been in nearly a century – we haven’t seen these tax rates since the ‘20s.

We lowered the corporate tax rate from 35 to 21 percent. We’ve never had that before. It lowers a business’s tax rate if they invest in their people and in this country.

[This] gives us a tax code that is really competitive. We had the highest tax rate in the industrialized world. Now we have a corporate tax rate that is below the international average…and it’s unleashing economic growth.

When asked about the biggest potential threats that could undermine an economy gaining steam, Speaker Ryan stated:

We’re not going to raise gas taxes…we’re just not going to do that here. The last thing we want to do is pass a short tax relief in December and undo that.

Lastly, Speaker Paul Ryan praised AFP activists and thanked them for their engagement during the tax reform debate:

I want to thank everyone from Americans for Prosperity. During the debate over the tax reform bill, if you turned on the TV, you’d hear Nancy Pelosi [calling tax reform] “Armageddon” and “crumbs.”

People at AFP knew better and contacted their members of Congress and said, “please get this done.”

Having constituents and voters who know the facts call and encourage their member of Congress to stay strong and do the right thing really helps. The grassroots was one of the key sparks that helped us get this done in December.

Tim Phillips concluded the call by thanking all who tuned in and reiterated the importance of touting the benefits millions of hard-working Americans will experience because of the Tax Cuts and Jobs Act’s impact on the American economy.

Going forward, Americans for Prosperity will continue to urge elected officials to protect the benefits we’ve seen to the American economy resulting from tax reform.

We will also continue urging lawmakers to advance more bold, pro-growth legislation that expands prosperity for every day Americans in the future.

Missed the tele-townhall call?
Listen to the full audio here.