ICYMI: Cars Lined Down Route 608 to Catch a Break at the Pump at Americans for Prosperity-Virginia’s “True Cost of Washington” Gas Station Event

Last Thursday, AFP-Virginia partnered with Goose Creek Market in Fishersville, VA to lower gas prices to $2.38 per gallon—the national average in mid-January 2021—as compared to the current average gas price in Virginia at $4.87/gallon at the. WHSV and The News Virginian captured footage of cars lined down Route 608 waiting to catch a break at the pump. The event attracted over 100 cars.

JC Hernandez, state director for Americans for Prosperity’s Virginia chapter, explained the purpose of their “True Cost of Washington” tour on WHSV, “we’re really trying to raise the awareness of inflation which is a major issue that we’re hearing from activists and people all across the commonwealth.” You can watch the full interview on WHSV here: 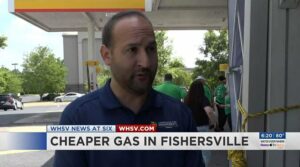 JC Hernandez underscored that its Washington’s bad economic policies that are driving up costs and hurting families. He told The News Virginian that “Congress and the (Biden) administration need to understand people are feeling it (pain).” You can read the full article in The News Virginian here.

Hernandez also joined “Joe Thomas in the Morning” on WCHV Radio to discuss the nationwide campaign and promote their gas station event. You can listen to the full WCHV interview here.

In addition, on Wednesday afternoon, AFP-VA hosted an event with over 50 members of the Richmond community at Richbrau Brewing to discuss and propose real solutions to make the cost of everyday goods more affordable for Virginians.

Background: The True Cost of Washington

AFP’s The True Cost of Washington campaign provides Americans across the country with the truth behind rising costs, while offering real solutions to make everyday life more affordable. Thanks to skyrocketing inflation, Americans can expect to spend an extra $5,500 to maintain the same standard of living as last year, and an extra $1,433 for gasoline.

A poll recently conducted by Public Opinion Strategies for AFP found that 75 percent of Americans reported that the increase in costs has impacted their consumer behavior over the past year. Most individuals surveyed agreed that government policies and regulations have caused price increases. 61 percent of those surveyed blamed President Biden for this increase.

AFP’s solutions to combat these rising prices garnered support, with 88 percent of respondents agreeing the government should make it easier to produce energy domestically, and 82 percent agreeing with getting government spending under control by tackling the federal debt and reducing federal budget deficits.