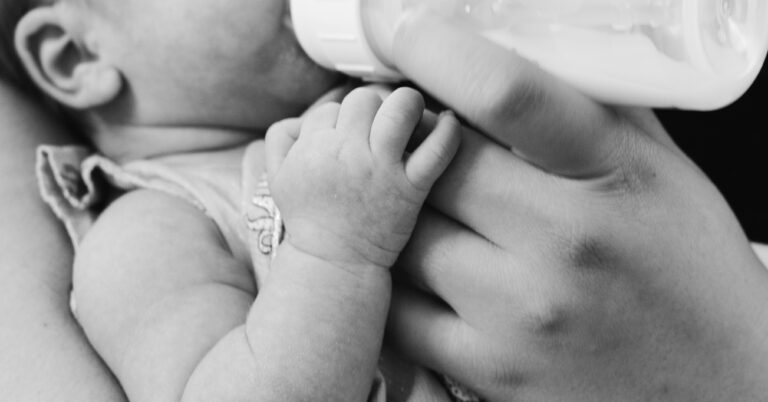 At a dinner I attended recently with some old chums, two of my female friends made delightful announcements that each was pregnant with her first child. More marvelous still, each was due at virtually the same time later this fall. Such a bounty of good tidings was met with the usual, if not pedestrian, inquiries from the table: Do you know the gender? What names are you considering?  Have you picked out wallpaper for the nursery?

Our group continued to pepper the pair with questions until one of them remarked, rather arrestingly, that she and her husband were, in fact, more worried about finding baby formula at this point than they were what color booties to buy.

Fair enough. The U.S. baby formula shortage recently hit a staggering 74 percent. But how can this be, in 21st century America, that new moms and dads, as well as expectant parents, wonder aloud if they will be able to feed their children on any given day—even months in advance? The answer lies not in consumer hoarding or corporate greed (two familiar bugaboos of our flatfooted policymakers), but in our government’s preternatural ability to get in the way.

Solutions for the symptoms, not the cause

Let’s set the table a bit. Families first started experiencing difficulty finding baby formula last summer, when out-of-stock rates hit 8 percent nationally. That rate began to climb throughout the year as the Food and Drug Administration (FDA) was receiving complaints from parents whose children were sick, possibly a result of bacterial infections caused by spoiled formula produced at an Abbott Laboratories plant in Michigan. All of this came to a head when, in February of this year, that plant paused production of Similac baby formula, and the company issued a voluntary recall.

Meanwhile Reckitt, which manufactures a rival formula product, Enfamil, was still reeling from pandemic-induced supply chain issues, causing significant delays and thus priming any safety-related shortage elsewhere to be exacerbated.  As these two companies account for about 80 percent of all infant formula sales in the U.S., even a minor disruption would have affected millions.

As the issue has mushroomed beyond anything approaching minor, and with one in five states experiencing a 90 percent shortage in their formula stocks, American families are left scrambling while our elected officials offer dubious excuses and de minimis solutions.

Take President Joe Biden’s invocation of the Defense Production Act. His plan requires that producers of baby formula ingredients (certain milks and vegetable oils) must first ship to formula manufacturers before other industry customers, who are then forced to wait. Additionally, the White House has begun shipping in formula from overseas to help bridge the gap.

But siphoning off product to specific sectors and flying over formula from Europe doesn’t address the root problem in this case, which is formula production. There simply wasn’t enough formula to spare when the Abbott plant went down, and the current plan is akin to rearranging deck chairs on the Titanic.

Instead, the government’s real problem here is one of perspective. Specifically, its “solutions” in this case belie one of the actual causes of the formula shortage—that the government’s own policies have for years protected favored firms from market competition.

It is no accident that the same domestic baby formula market that consumes nearly all the formula it produces is also one in which just four companies (Abbott, Reckitt, Nestlé, and Perrigo) dominate with a combined 90 percent market share. While these firms no doubt make products worthy of consumer loyalty, several of them also have a lot of help from Uncle Sam, who seeks to cut off their competition from all angles.

To find this favoritism in practice, we need only to look to the Special Supplemental Nutrition Program for Women, Infants, and Children.  Through WIC, only three formula manufacturers are authorized by the federal government to sell baby formulas. Abbott, Reckitt, and Nestlé, of course.  And, as a condition of WIC grant participation, state governments contract for baby formula with just one of these three companies. WIC reimburses 15 percent of wholesale costs and is responsible for most formula sales nationwide.

So, at any given time, Abbott, Reckitt, or Nestlé control a multi-state monopoly protected and almost entirely financed by taxpayer resources. What firm would—or could—compete with that?

Another place we find rampant protectionism is in the onerous restrictions on the importation of baby formula—to say nothing of the 17.5 percent tariff that dissuades most international producers from seeking to enter the domestic market, and overly complex FDA labeling and ingredient requirements that make it utterly prohibitive for foreign companies to bring their products to American shelves. And even though many parents do buy unapproved formula from abroad, doing so is highly illegal.

So, while an otherwise great alternative would be to buy, say, European-produced formula—which meets most FDA safety and nutritional standards—parents who do so risk certain penalties. What’s more frustrating, perhaps, is that the FDA largely doesn’t even see this as a safety issue; rather it’s just a question of having the right labels. That makes sense, one supposes, given that the FDA decided to temporarily relax some of its pointless rules in favor of getting more formula to market as soon as possible.

It would be disingenuous, of course, to wholly blame the federal government for causing the formula shortage, per se. The global supply chain is certainly still out of whack from the pandemic after all, and no one could have predicted a possible cronobacter outbreak at a production site. But for many families, such realities—especially in the face of belated excuses and misapplied “reforms” from the Biden administration—are of little consolation.

While the president has finally begun to formally address the problem (which he acknowledges wasn’t even on his radar until April), it has become obvious that his administration’s “whole-of-government” strategy is centered more on curing the symptoms of the problem than fixing its causes.

Hopefully the Abbott plant in Michigan gets back online soon and production can ramp up. But the lessons of this episode should not be hastily forgotten. If we are to learn anything, let it be that government-granted monopolies and counterproductive overregulation are a recipe for collapse.

While none of us can necessarily predict an emergency of this scale, it is entirely possible to understand—and move away from—the systemic failures that, once cascading, invariably lead to disaster. Paring back, or eliminating entirely, these burdensome and protectionist policies would help fortify our industries against future shortages and see to it that American families, like those of my two friends, can get the things they need.

Michael J. Lambert is a policy analyst with Americans for Prosperity.