Gabriella Hoffman loves the outdoors. In her work as a freelance writer and media strategist, she helps advance political freedom, and she feels the most free when her work takes her outside to cover conservation, hunting, and fishing.

Hoffman started her career in Washington, D.C., working a traditional 9-to-5 job that kept her mostly indoors. She was passionate about the mission of her organization, and she largely enjoyed her work organizing and training student groups around the country to be politically engaged.

But over time, she wanted to work in communications full time and realized she hit an apex at her job. With no room for upward mobility, she decided to forge a different path better aligned with her interests.

After several years, she left that organization and began freelancing while searching for another job. But she quickly realized that her temporary arrangement fulfilled her the way a 9-to-5 job never could.

“I can see the impact of my work,” she says.

“I feel like I’m actually changing the conversation when it comes to a multitude of subjects, whether it’s conservation, hunting, fishing, or talking about free markets. I feel good that I’m doing something to bridge gaps, to help people work together, and to strengthen these different movements and causes that I believe in.”

Even though the early days of freelancing were incredibly difficult due to inconsistent work and income, Hoffman stuck with it.

To her, being entrepreneurial became a badge of honor. She realized that she wasn’t just talking about the merits of the free market anymore, she was actually living it — and she began to thrive.

“I’m in control of what I can and cannot do, and I like that.”

Now, several years into her freelancing career, she’s traveling around the country again, this time producing media campaigns with clients in the outdoor industry.

Whether she’s promoting hunting events for veterans or managing a social media campaign for an outdoor association, she is able to have direct oversight of her projects, deciding which states to travel to, what stories to cover, and which people to interview.

In 2019, she won a Pinnacle Award from the Professional Outdoor Media Association, which honors writers for exceptional achievement in conservation journalism.

Not only did Hoffman feel more fulfilled, but the autonomy of a freelancing career gave her the freedom she had been looking for.

“When I was constrained to doing 9-to-5 work, I didn’t have much oversight over the project because I had to report to a boss,” she says. “I feel that the work I’m doing now excites me more. I’m in control of what I can and cannot do, and I like that.”

Being able to navigate the outdoor industry and win her own clients and awards feels patriotic to Hoffman, who is the daughter of immigrant parents. “It’s an American concept when you can pioneer something or lead a charge on something,” she says.

Looking into the future, however, Hoffman worries that impending federal legislation may take away her freedom to live her American dream.

Her parents fled the Soviet Union in the 1980s and found freedom and opportunity in the United States, settling in California where they started their own small business and raised their children. They eventually left California after its state government began reminding them of the communism they left behind.

With the specter of a controlling government in her family’s past, Hoffman was concerned when she first learned about AB 5, California’s law requiring companies to reclassify most of their freelancing contractors as employees. AB 5 has caused a chilling effect on all independent contracting in the state.

“When I saw that AB 5 passed, I thought, ‘Hmm, California is an incubator for bad policy, and I foresee that if this is passed and signed into law, this is going to become national.’ “And lo and behold, during the 2020 presidential election, this was a national issue.”

Not only was Hoffman correct that the idea of reclassifying freelancers as employees became a national issue, but recently, the PRO Act passed the House. This federal legislation would apply similar restrictions across the country and would severely impact freelancers like Hoffman, who lives in Virginia but whose work takes her across many states.

Hoffman is concerned about what this legislation could mean for her work in the outdoor industry. She has labored over the last several years to establish herself as an expert in her field and has built up a client base she enjoys working with.

The PRO Act would make it more difficult for those same clients to hire her in the future. She doesn’t want to be forced to be an employee and work a 9-to-5 job again, and she sees this kind of legislation as threatening to do that by taking away choices for herself and her fellow freelancers.

“I see it as an attack on worker freedom,” she says.

“Restricting worker freedom will make a lot of people unhappy and would run counter to how this country was founded: encouraging entrepreneurship and encouraging people to decide their own outcomes rather than having the government coming in and deciding outcomes.”

That’s why Hoffman is using her writing and media skills to spread awareness among freelancers that this legislation is a real threat to them. She hopes that by sharing her and her family’s story, she can help protect the freedom they sought and found in the United States more than 30 years ago.

“I still think you can succeed and make it in this country, whether you’re leading a multibillion-dollar company or a one-person business like I do,” she says. “I still think it’s the last, best hope.” 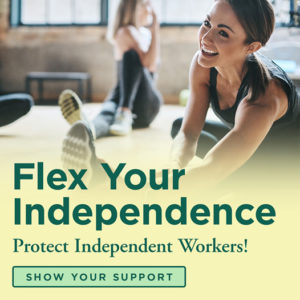 Learn more about the Flex Your Independence campaign and how you can help celebrate independent workers and entrepreneurs like Gabriella.