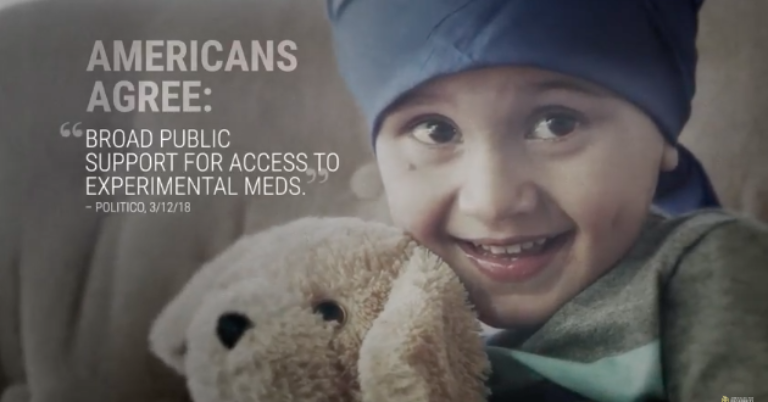 Stalled in Congress, grassroots group urging action on bipartisan measure to save lives

The initial six-figure investment is part of the organization’s broader grassroots effort to advance right-to-try legislation to the president’s desk. The ad highlights leaders of both parties, including President Trump, expressing their support for giving terminally-ill patients hope and the freedom to try experimental treatments and medications that could save their lives.

Last year, under the leadership of Senator Ron Johnson (R-Wis.), the Senate passed Right to Try by unanimous voice vote. In March of this year, the House passed a different version with bipartisan support, leaving the legislation at an impasse.

Meanwhile, President Trump and Vice President Mike Pence have repeatedly expressed support for Right to Try and the president stands ready to sign the life-saving policy into law.

“Right-to-try legislation could make all the difference for the tens of thousands of terminally-ill patients who are running out of options to save their own lives. These patients and their families are counting on Congress to end to the inaction, get to work, and extend to them the hope they so desperately need and deserve. They don’t have time for political games; Congress needs to act now.”

The digital campaign will target House and Senate leadership, as well as Senator Lamar Alexander (R-Tenn.), Chairman of the Senate Health, Education, Labor and Pensions Committee, and Congressman Greg Walden (R-Ore.), Chairman of the House Energy and Commerce Committee. Both committees have jurisdiction over Right to Try legislation.

Americans for Prosperity has long advocated for Right to Try, supporting state-based measures in Tennessee in 2015, Georgia in 2016, Kentucky in 2017 and most recently in Wisconsin in March.

With the success of Right to Try in the states, AFP began urging lawmakers to pass federal right-to-try legislation earlier this year. Last week, AFP released an educational video on Right to Try, which also encouraged viewers to voice their support for the measure.