HELENA, Mont. – Following the House passage of H.R. 3, the Spending Cuts to Expired and Unnecessary Programs Act, Americans for Prosperity-Montana (AFP-MT) will start running digital ads urging Sen. Tester to approve the bill that would save taxpayers about $15 billion in unspent funds from previous years.

When debating the “Gang of Six” budget bill in 2011, Sen. Tester released a statement highlighting the need of Montanans to have a bipartisan agreement on the budget proclaiming, “real problems require tough votes, not politics-as-usual excuses.”

“Reducing our national debt shouldn’t be a partisan issue. Everyone agrees our record national debt threatens our security and our economic standing in the world. Asking for unused funds to be given back to help pay down that debt would be a good first step reversing our bad spending habits that got us in this position.

“Sen. Tester claims he’s worried about the debt and deficits. If that’s the case he should have no problem supporting this a very modest but necessary first step toward getting spending under control. We urge Sen. Tester to do the right thing for Montanans and approve this measure.” 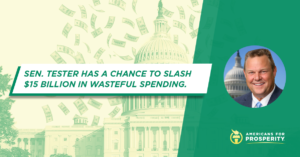