NASHVILLE, Tenn. – Americans for Prosperity-Tennessee (AFP-TN) today announced a new seven-figure investment in television and digital advertisements highlighting Phil Bredesen’s record as a big spender and supporter of higher taxes. Americans for Prosperity is spending $2 million on the new ad that is hitting the airwaves statewide this Thursday. 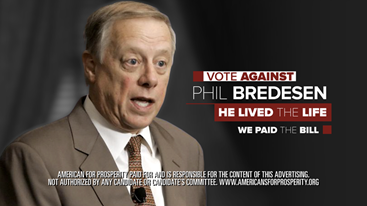 “Phil Bredesen’s rhetoric of fiscal responsibility won’t fool Tennesseans; his record speaks for itself. During his time in office, Bredesen supported tax and fee increases that hurt Tennesseans while times were tough and our economy was in a tailspin. And despite Bredesen’s claims to be fiscally responsible, there’s nothing responsible about lavishing nearly $9 million taxpayer dollars on a renovation to the governor’s mansion. Tennesseans don’t want a senator who says one thing and then does another, but that is what they’ll get with Phil Bredesen.”

When times are tough, we budget for our families.

But when our states budget was in crisis, Phil Bredesen supported higher taxes on us.

And while we struggled through a recession,

Four million on a party cave, gilded bathrooms and a kitchen worth two Tennessee homes.

Phil Bredesen lived the life. We paid the bill.

AFP-TN recently announced it has mobilized its activists and launched grassroots activities in support of Marsha Blackburn.