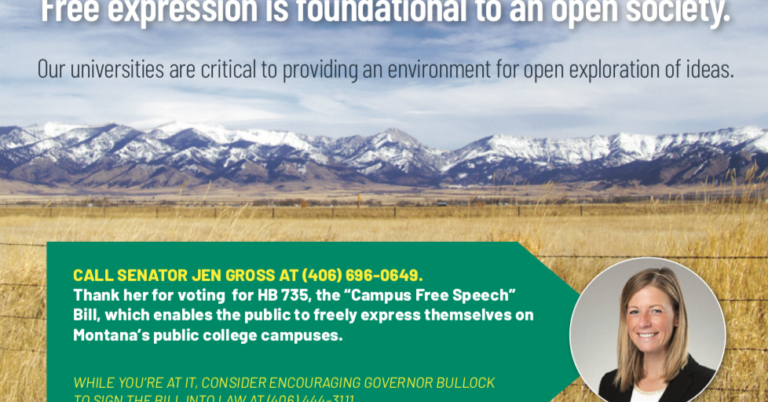 HELENA, Montana – Americans for Prosperity-Montana (AFP-MT) announced a new direct mail campaign thanking lawmakers for voting in support of ground breaking legislation that will protect free expression for students and faculty on Montana’s public college campuses. The Campus Free Speech bill (House Bill 735) received bipartisan support in both the House and the Senate, as well as the backing of a broad coalition of groups including the ACLU of Montana.

The campaign comes on the heels of a productive legislative session that saw lawmakers from both sides of the aisle come together to pass meaningful reforms including driver’s license suspension reform (House Bill 217) and tax lien forfeiture reform (Senate Bill 253).

“This legislation positions Montana as a leader in the protection of free expression,” said AFP-MT State Director David Herbst. “We wanted to take the opportunity after session to thank lawmakers who stood up and voted to protect our first freedom. It was encouraging to see members from all sides of the aisle unite behind a bill that ensures students can freely express their unique views and engage with challenging ideas.”