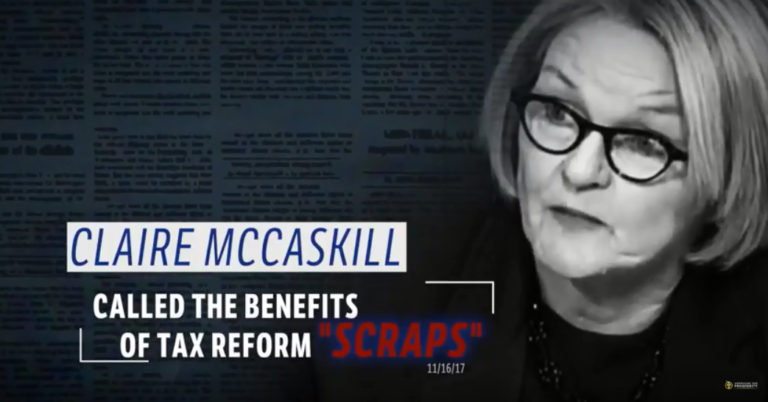 JEFFERSON CITY, Mo. – Americans for Prosperity-Missouri (AFP-MO) is launching a nearly $2 million ad campaign in Missouri on Thursday, highlighting a family’s story about how they are benefiting from tax reform. The ad also highlights how U.S. Sen. Claire McCaskill’s vote against the Tax Cuts and Jobs Act was a vote against hard-working families keeping more of their hard-earned money and urges Missourians to tell her to support higher paychecks for workers. This is the second wave of the grassroots group’s efforts, which includes supplemental digital ads, to inform Missourians of the benefits of tax reform and Sen. McCaskill’s voting record.

The effort expands on AFP’s previous seven-figure investment on the same topic in February (read more). The new advertisements will begin Thursday and will run into April.

In the spot, Lindsay, a working mother of three, shares her story about getting an email at work informing employees that they would receive a $2,000 bonus because of the Tax Cuts and Jobs Act:

“It is clearly helping middle-class and everyday-working Americans. When I heard Claire McCaskill describe the tax cuts as ‘scraps,’ I think it’s disrespectful. Getting bonuses and tax cuts — that’s huge for families like mine.”

The ad calls on Missourians to urge Sen. McCaskill to “support bigger paychecks.”

Hardworking Americans are already seeing the benefits of the Tax Cuts and Jobs Act as hundreds of companies invest in their employees and communities by creating jobs and increasing wages. Sen. McCaskill voted to deny individuals and families these benefits, choosing party over common sense economic relief for middle class families.

This ad effort is part of AFP’s campaign to hold accountable lawmakers who voted against the pro-growth reform.

“While Sen. McCaskill claims she’s fighting for middle-class families, she scoffs at Missourians keeping more of their money and calls bonuses like the one Lindsay got ‘scraps.’ How out-of-touch do you have to be to think $2,000 is scraps? Our activists tell us even a few bucks every paycheck can help pay bills or save for their kids’ future. By voting ‘no’ on tax reform, Sen. McCaskill proved she doesn’t stand for middle-class families. Her actions speak louder than her out of touch, D.C. rhetoric.

“We’re proud to champion the tax cuts that have provided much-needed relief to families like Lindsay’s and enabled countless Missouri companies to shell out employee bonuses, raises, and other benefits. This ad campaign is important to make sure the truth gets out about how tax reform is benefiting middle-class families, instead of politicians purposely using misleading political talking points to excuse their bad vote.”

Senator McCaskill Said No To Tax Reform, Describing The Benefits To Missourians As “Scraps”

Missourians Are Already Reaping The Benefits Of Tax Reform