AFP-MI TV Ad: Michigan Would Be Worse Off with Gretchen Whitmer

Lansing, MI – Americans for Prosperity – Michigan (AFP-MI) today announced its continued efforts against former state senator, Gretchen Whitmer. This week, AFP-MI will launch a $1.6 million television and digital ad campaign airing across Michigan that focuses on the detrimental policies Whitmer supported as a state senator and urges Michiganders to vote against Whitmer for governor in November.

“Is anyone nostalgic for the days when Gretchen Whitmer and Jennifer Granholm were raising our taxes while our economy tanked?  Whitmer’s policies were wrong then and they’re wrong now.  We’ve turned things around in this state and Michiganders can’t afford another ‘Lost Decade.’  So, in November we urge voters to reject Gretchen Whitmer and her failed policies.” 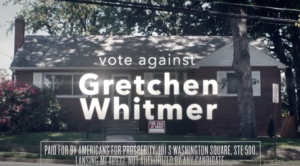 Americans for Prosperity strives to promote equal rights and a society of mutual benefit by advancing pro-growth policies that reduce the tax burden on individuals and businesses, rein in corporate welfare and out-of-control government spending and remove barriers to opportunity. In doing so, AFP and the Michigan state chapter aim to help the state and the nation reach its full economic potential. As part of this mission, AFP Michigan will be encouraging lawmakers to embrace policies at the state and federal level that help improve the lives of all Americans, especially the least fortunate.

For further information or an interview, reach Anna McEntee, amcentee@afphq.org, 703-674-9227