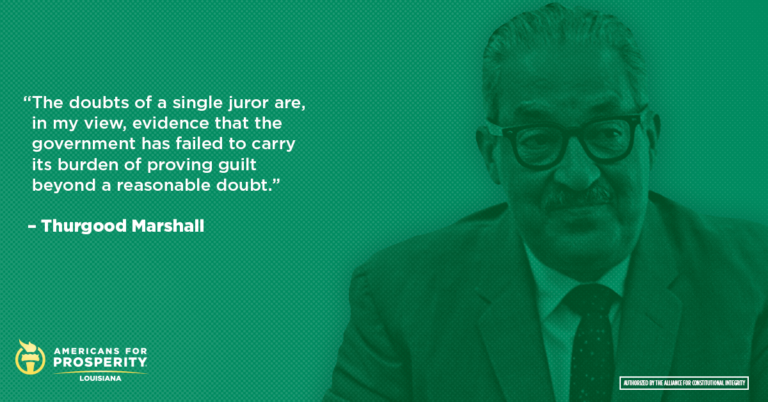 AFP-Louisiana: Only a Unanimous Jury Should Be Able to Convict

BATON ROUGE, La. – Americans for Prosperity-Louisiana (AFP-LA) announced Monday a campaign to mobilize voters to support Constitutional Amendment 2, which would change the Louisiana Constitution to require unanimous jury verdicts in all non-capital felony cases. Currently, Louisiana is the only state in the nation that allows a conviction in non-capital cases by a vote of only 10 of 12 jurors. The federal government and 48 other states require unanimous juries. The campaign, in conjunction with the Alliance for Constitutional Integrity, will include a large digital ad buy, direct mail, and targeted grassroots outreach.

“I am pleased to announce AFP Louisiana’s support of Constitutional Amendment 2,” said AFP-LA State Director John Kay. “Louisianans deserve a justice system that values, above all else, the rights of the accused in a jury trial. A system that places a higher value on conviction rates than the pursuit of the truth is a system that has no place in our society.

“Our staff and activists at AFP Louisiana are excited to come together with folks across the ideological spectrum to stand up for what is right. There is no cause more important than preventing the government from taking away an innocent person’s life and liberty in a courtroom.”