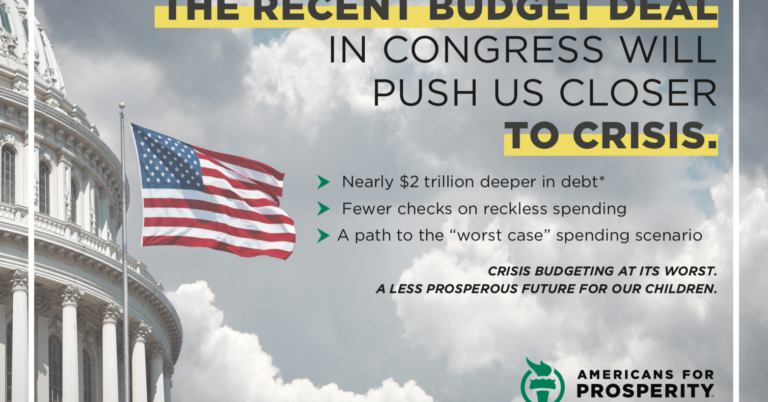 Grassroots group announces direct mail and digital campaign urging House and Senate lawmakers to continue working to stop reckless spending when they arrive back to Washington.

Arlington, Va. – Americans for Prosperity (AFP) today launched a new direct mail and digital effort thanking 25 House and Senate lawmakers who took a principled stand for fiscal responsibility by voting against the Bipartisan Budget Act of 2019, and encouraging them to continue fighting against Washington’s reckless spending.

This campaign comes as lawmakers are still home in their districts and preparing to return to Washington to work on the 12 annual must-pass appropriations bills. The direct mail and digital ads follow a month-long effort by grassroots state chapters to visit district offices urging lawmakers to rein in spending and reject harmful policies like tax extenders and the reauthorization of the Export-Import Bank.

“Washington’s unhealthy addiction to overspending continues to diminish America’s future,” said Russ Latino, a vice president at Americans for Prosperity, managing the organization’s economic opportunity portfolio. “The recent budget deal is the latest in a string of reckless spending measures that will have lasting consequences for generations to come.”

“As negotiations continue on spending bills for the next fiscal year, we want lawmakers to know that we will have their backs when they stand on principle. We applaud their commitment to safeguarding the country’s economic future and hope that they will continue to stand strong for American families.”

AFP opposed the Bipartisan Budget Act of 2019 as it moved through Congress and urged President Trump to veto the measure in order to send Congress back to the drawing board. The deal raises spending levels by $320 billion and extends the debt limit until at least 2021, adding nearly $2 trillion to the national debt over the next 10 years. It puts the federal government on a path to see the “worst-case” scenario projected by the CBO.

Background:
AFP Urges President Trump to Veto Budget Deal If It Reaches His Desk (8/1/19)
AFP: Budget Deal is a Direct Path to the CBO’s Worse-Case Crisis (7/23/19)
AFP Report: Looming Debt and Spending Crisis Threatens Standard of Living for All Americans (7/19/19)