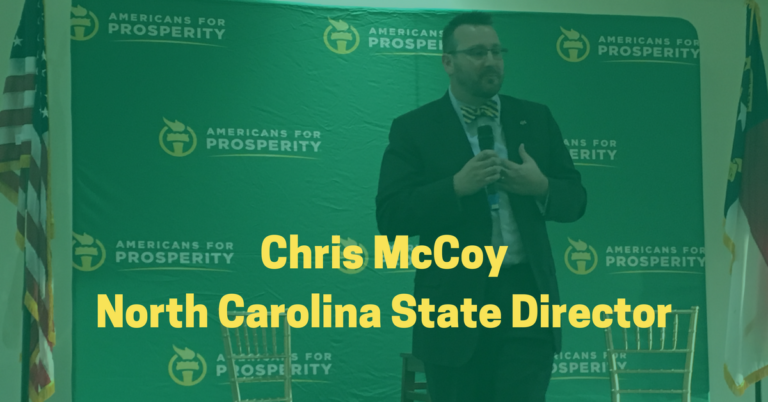 We’re excited to announce that Chris McCoy has been promoted to AFP-NC’s new state director.

Previously serving as a field director in Winston-Salem, and then as senior field director, Chris will now be your voice at the state capitol, fighting for more freedom and opportunity for all North Carolinians. He lives in Moorseville with his wife, three kids, and two Bluetick Hounds.

Originally, I was born in Greensboro, NC and completed High School in Jamestown, NC at Ragsdale High School (Go Tigers). I returned to NC after college and have lived here ever since.

2. What do you love most about North Carolina?

Wow, I have to pick one thing? The mountains, the beaches, our history, the Hurricanes (hockey, not the storm), the great people I meet every day are all things I love about this state. However, understanding that this is perhaps the most divisive topic I can pick to love,  I’ll have to say that Lexington style BBQ is probably my favorite thing about this state.

3. What is your favorite pastime or hobby?

College Football – Specifically the University of Tennessee. Second to that is Scuba Diving, we have some amazing spots to dive here on the NC coast if you are into wreck diving (which I am). Thirdly, I’m a groupie for my kids and their sporting events.

4. How did you get involved in grassroots activism?

While I had been involved in political campaigns for years before I was drawn to the grassroots side of the politics, I took my first step into true grassroots in 2008. At the time there was a phenomenon sweeping the nation as individuals were getting more educated and involved politically. This movement was very individualistic and every group looked different.

I was intrigued with the ability of individuals to bind together, organically, behind a cause on their own – a true bottom up movement. I observed the power a unified grassroots army can have. In North Carolina, through well planned campaigns and broad grassroots support, the conservatives were able to gain control of the legislature. A couple years later through the continued grassroots movement, conservatives gained supermajority status along with the Governor and Lt. Governor. It was through these efforts here in NC that I first got involved in true grassroots activism.

5. What impresses you most about AFP’s activists?

It has to be their relentless commitment to working for more freedom and liberty. These individuals invest a lot of their time to help us move closer to a free and open society. Whether it is getting up at 3 a.m. to drive to Washington, DC to meet with their member of congress or spending time on the phones educating citizens, they are always ready for action.