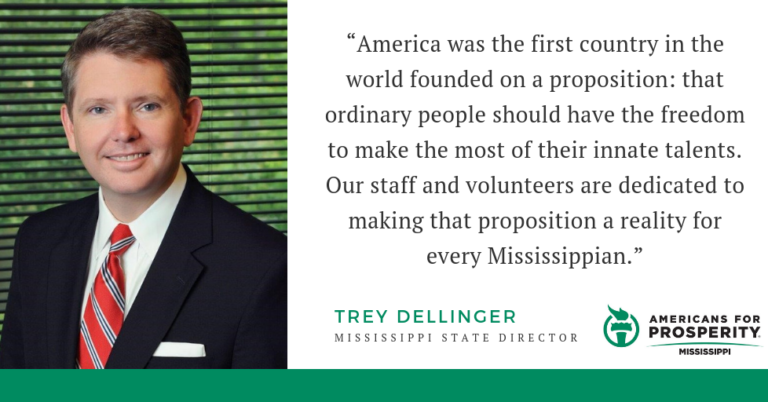 Americans for Prosperity-Mississippi has a new state director: Trey Dellinger!

Before joining AFP, Trey spent more than 20 years in private law practice, the last 17 of which were with the Wells Marble firm where he defended businesses and individuals from civil lawsuits. Trey was consistently ranked a top lawyer amongst his peers and by professional rating groups.

Get to know more about Trey in the Q & A below!

Who is Trey Dellinger?

I’m a proud husband of Angie and father of son, Jack.  I’m a lawyer who studied physics and who loves to spend free time watching football or painting pictures.  A non-cynic to the end, I believe in freedom.

Are you a life-long Mississippian?

I’ve lived all my life in Mississippi, except for a few months in elementary school when I lived in the Nashville, Tennessee area and a college summer internship near Chicago when I interned with the University of Mississippi High Energy Physics Group at Fermi National Accelerator Laboratory (Fermilab).  It was a truly life changing experience.  I met people from all over the world of all faiths and backgrounds.  They were some of the kindest and most brilliant people you could ever meet.

What are you most excited to tackle in your role as state director?

I am very interested in policies at the intersection of education, economic freedom and technology.  I believe that in the overlap of those three policy areas there is great potential to change peoples’ lives for the better.

What does economic opportunity mean to you?

Abraham Lincoln is my political hero.  He understood what this country really is – and can be at its best – in a way few people ever have.  Lincoln said the purpose of government was “to elevate the condition of men–to lift artificial weights from all shoulders, to clear the paths of laudable pursuit for all, to afford all an unfettered start and a fair chance, in the race of life.”

Lincoln wrote those words 157 years ago, but they hold so much truth for us today:  That government exists to help people improve their lives, and that it does that best by clearing barriers out of their way so they can run the race of life, not by running the race for them.  That’s what economic opportunity means to me.

My mom’s purple-hull peas with plenty of cayenne pepper.

What was your first job?

The first real job where I recall actually getting paid was my summer internship at Fermilab.  I ran the bucking coils on the Cherenkov radiation detector.  It sounds like much more of a big deal than it actually was.  Looking back, I’m sure they gave me a simple task where I couldn’t break anything important.