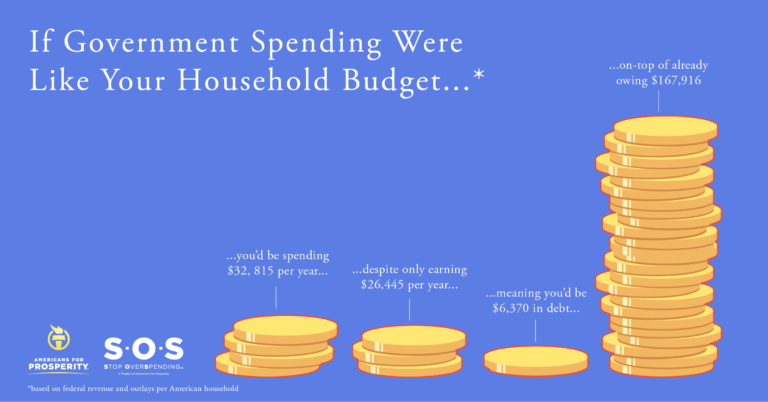 We frequently hear the federal government’s spending compared to a household budget. Both have to tighten their belts when they can’t afford things, the saying goes.

But what if Americans really did spend the same way as Washington, DC does?

The U.S. is on track to spend $4.1 TRILLION this year, the first time we’ve breached the $4 trillion mark. But total federal tax revenue is $3.34 trillion. That leaves a deficit of over $800 billion for this year alone.

That’s on top of the national debt. As of July, it stood at a massive $21 trillion.

And how about future promises? When you factor in Medicare, Medicaid, Social Security, and other promised the government has made, Congress says we’ll eventually be good for another $52 trillion.

A stack of a trillion dollars would reach the moon and back 4 times….so let’s take it down to numbers we can actually wrap our heads around.

This egregious pattern of spending would quickly get an individual or household plenty of phone calls from creditors.

Worst of all, you’re planning your life as if you’ll be able to eventually cover another $409,000 in expenses (maybe you’re eyeing a mini-mansion by the lake?).

Clearly, these debt and spending levels are simply unsustainable and will start to undermine the benefits of comprehensive tax reform.

That’s why we’re urging Congress this year to freeze discretionary spending at 2018 levels.  It’s the least they can do right now, and it would be a down payment on fixing our larger overspending problem.

To find out more, head to www.StopOverspending.com.